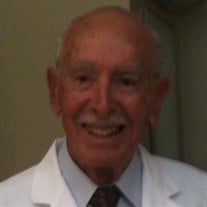 Dr. Rafael Garza passed away peacefully surrounded by his loving family on February 20 , at the age of 96. He was born in San Antonio ,TX, the only child to Tomasa and Rafael Garza. He had the best of two worlds growing up with cousins, sharing his time between San Antonio, Texas and Monterrey, Mexico. He excelled in academics, mastering English and Spanish completing primary and secondary schools in both countries. Rafael met the love of his life, Maria Teresa in Monterrey, Mexico while attending Medical School at the University of Nuevo Leon. Dr Garza fulfilled his internship at St. John’s Hospital in St. Louis, MO. followed by residencies in family practice at St. Joseph’s Hospital , Fort Worth, TX and obstetrics at Baptist Memorial Hospital in San Antonio, TX . Rafael and Maria Teresa married in 1950 beginning an exciting life together. Rafael served as Chief Medical Officer during the construction of Falcon Dam and later worked in the practice of Dr. Mario Ramirez in Roma TX . An opportunity to serve in partnership with Dr. Jorge Trevino brought the Garzas to McAllen, TX in 1957. The practice grew exponentially with the addition of a maternity clinic. Medicine was his passion, especially the honor of delivering babies. During the subsequent years, people often stopped him to say hello and thank him for treating their grandparents , their parents, for delivering them and then bringing their children into the world. At the age of 74, Dr. Garza retired from family practice. He then pursued a speciality in wound care medicine, practicing in Mission, TX. until the age of 89. On May 10, 2012 he was featured by the New York Times due to his longevity and dedication to his profession. Dr Rafael Garza was preceded in death by his loving wife of 69 years, Maria Teresa. Together they are survived by their five children , Maria Reynolds-Diaz “Chacha”, Patsy Vela (Efraim), Elena Black( Chris) ,Rafael Garza ( Liz) , Laura Lewis( Brian), 13 grandchildren and 11 great-grandchildren. Dr. Garza held various leadership positions within the affiliations of the American Academy of Family Practice. He served as President of the Valley Chapter for two terms. He served on numerous committees , on the Board of Directors and was President of the Texas Academy of Family Practice from 1984-1985. He also was instrumental in the growth of the McAllen Medical Center serving as Chief of Staff. A strong proponent of education, Dr. Garza was Founding Member and President of the Board of Trustees of the Physician’s Education Foundation of the Family Practice Residency Program at the University of Texas Health Science Center at San Antonio where he also served as Clinical Professor . Rafael was known for his gusto for life, his appreciation for music, smooth dance skills, flawless recitation of poetry, adventurous travel , spirited golf games and continuous teaching and learning. He cherished his time with family, his patients and his many amigos. He lived by his strong faith. No matter how busy, he found time to serve the community by doing physicals for school sports teams and treating nursing home patients. He will be remembered for his boundless energy, positive attitude and commitment to helping others, inspiring all who knew him to do the same. He touched the lives and captured the endearment and respect of many. Private family services will be held. Memorial donations in Dr. Rafael Garza’s honor may be made to Our Lady of Sorrows Capital Campaign Fund, 1108 West Hackberry, McAllen, TX 78501 or to UTRGV School of Medicine Scholarship Fund , 701 E. Expressway 83, Box #13, McAllen , TX 78501 or online at [email protected]" title="Click to open in a new window or tab" target="_blank" rel="nofollow noopener">[email protected] The family wishes to express deepest appreciation to his physicians, nurses of Presidente Home Care and caregivers for their devoted care and attention.

Dr. Rafael Garza passed away peacefully surrounded by his loving family on February 20 , at the age of 96. He was born in San Antonio ,TX, the only child to Tomasa and Rafael Garza. He had the best of two worlds growing up with cousins, sharing... View Obituary & Service Information

The family of Dr. Rafael Garza created this Life Tributes page to make it easy to share your memories.

Dr. Rafael Garza passed away peacefully surrounded by his loving...