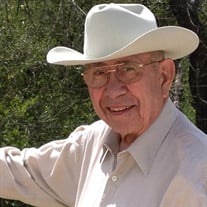 Marvin Tavarez, M.D. Dr. Marvin Tavarez, 90, passed away peacefully in his home on Tuesday, January 16, 2018. Marvin was born on September 13, 1927 in Mexico City, the son of Vicente and Margarita Tavarez. He attended both grade school and high school at the Holding Institute in Laredo, Texas. He then attended the University of Texas at Austin from 1946-1950, where he received a Bachelor of Arts degree in Chemistry and Bacteriology. Medical school followed (1950-1955) at the University of Nuevo Leon in Monterrey, Mexico. In 1956, he completed a rotating internship at Sioux Valley Hospital, Sioux Falls, South Dakota, where he met Alice Elizabeth Mills. They married in Sioux Falls on June 24, 1957. From 1958 to 1961, he was a resident in Internal Medicine at Scott & White Hospital in Temple, TX. After four years in Temple, Marvin and Alice moved to McAllen where he started his private practice in February 1962. Three years later his younger brother Hiram joined him in the practice. In June of that same year, his older brother Vicente opened his own surgery practice and the group later became known as Tavarez Medical Center. Marvin was a member of the American Society of Internal Medicine and was very active in the medical community. He served as Assistant Professor of Medicine for the University of Texas Residency Program in McAllen. Marvin was Chief of Staff at McAllen General Hospital (1976-1977) and a member of the board of directors at McAllen Medical Center (1978-1987). He was also on the Board of Directors at Rio Grande Regional Hospital from 1989-1998, serving as board chairman from 1990-1992 and Chief of Medicine twice. Marvin was active in the community in numerous organizations serving as an Elder at First Presbyterian Church McAllen, Rotary International, The Salvation Army Advisory Board Chairman, The McAllen Country Club Board of Directors and the Advisory Board of the South Texas Symphony Association. He and his brother Hiram were honored by the Muscular Dystrophy Association in 2006 were recipients of the Oscar Cardenas Humanitarian Award. Marvin quietly donated countless hours to McAllen ISD giving physicals to athletes and serving as team doctor for many years to the McHi football teams. Marvin is survived by his wife of 60 years, Alice; son Marvin Jr. (Pleasanton, TX); son Ronnie and wife Eva and grandsons Vince and Ryan (McAllen, TX); brother Hiram and wife Kathe (McAllen, TX), sister Hilda Tavarez Menendez (Rio Bravo, MX), and numerous nieces and nephews. He was preceded in death by his parents and brother Vicente and sister Mildred. The family would like to acknowledge Tencha Irlas, Luis Posadas, and Ada Alanis for their compassionate, tender, and loving care for Marvin during the past several years. Visitation will be held on Sunday, January 21st at Kreidler Funeral Home from 4 pm to 7 pm. Following a private family burial, a memorial service will be held on Monday, January 22nd at First United Methodist Church McAllen at 3 pm. Serving as pallbearers are sons Marvin Jr. and Ronnie, grandsons Vince and Ryan, brother Dr. Hiram, and nephews Vicente III and Hiram Jr. Honorary pallbearers are Ruben Cardenas, Bill Duck and Sally Brace. The family suggests that memorial donations be made to the Salvation Army (1600 N. 23rd St, McAllen, TX 78501) or The Vannie E. Cook Jr. Cancer Foundation (101 W. Expy 83, McAllen, TX 78503).

Marvin Tavarez, M.D. Dr. Marvin Tavarez, 90, passed away peacefully in his home on Tuesday, January 16, 2018. Marvin was born on September 13, 1927 in Mexico City, the son of Vicente and Margarita Tavarez. He attended both grade school and... View Obituary & Service Information

The family of Dr. Marvin Tavarez created this Life Tributes page to make it easy to share your memories.