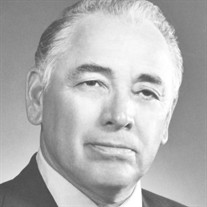 Dr. Ignacio Magana, 89 years of age, passed away peacefully at his home surrounded by his family at the bedside on April 16, 201 7. Born in Morelia, Michoacan, Mexico on April 16, 1928 he was the son of Raphael Magana Mendez and Refugio Reyes. He attended the Universidad Michoacana de San Nicolas in Morelia and then went to medical school at the Universidad Nacional Autonomia de Mexico in Mexico City. Subsequently he trained in internal medicine at Maumee Valley Hospital in Toledo, Ohio from 1956-57 and then began training in psychiatry/neurology first at Essex Hospital in Cedar Grove, New Jersey from 1957-1959 and then finally at Southwestern Medical School/Parkland Hospital in Dallas, Texas from 1961-1962. He was appointed the Director of the Harlingen State Mental Health Center in 1962 which marks his arrival to the Rio Grande Valley.He served in this position for the next two years before coming to practice in McAllen, Texas. During his many years of service to the Rio Grande Valley he made significant medical and social contributions. He introduced modem psychatric pharmacological practice and electroconvulsive therapy for Texas from south of San Antonio to Northern Mexico. He was on the staff at McAllen Medical Center and was the past Director of Charter Palms Psychiatric Hospital. He received the Psychiatric Excellence Award from the Texas Society of Psychiatric Physicians. He was a Past President of Hidalgo Starr County Medical Society. The Associated City-County Economic Development Corporation of Hidalgo County honored him in 1976 for his public service. In concert with many other Hispanic professionals he continually sought to improve Valley development and opportunity. He is survived by the love of his life and wife, Mary Alice Contreras Magana, his four children: Tony(Carmen), Ralph(Laura),Laura Grubb(Andrew), Deborah Bilyeu(Michael);six grandchildren: Melissa Aramburo, Malea Pringle, Robert Michael Bilyeu,Joseph Magana, Raphael Magana, and Christina Magana; and three great-grand children. He is also survived by his brothers; Rafael (Yolanda),Eduardo(Raquel), Salvador(Martha), Arturo(Teresa); his sisters: Angela Perez, Hilda Orci(Ramiro), Teresa Ojeda and Minerva Mireles. All his siblings are of Mexico. He was preceded in death by his parents and older sister, Isabel Ruiz. Visitation is scheduled at Kreidler Funeral Home in McAllen on April 20 from 4 to 8 pm with Rosary at 7 pm. Funeral rite will be held at Our Lady of Sorrows Catholic Church in McAllen on April 21 at 10 am with internment to follow at Roselawn Cemetary in McAllen.

Dr. Ignacio Magana, 89 years of age, passed away peacefully at his home surrounded by his family at the bedside on April 16, 201 7. Born in Morelia, Michoacan, Mexico on April 16, 1928 he was the son of Raphael Magana Mendez and Refugio Reyes.... View Obituary & Service Information

The family of Dr. Ignacio Magana created this Life Tributes page to make it easy to share your memories.

Dr. Ignacio Magana, 89 years of age, passed away peacefully at...