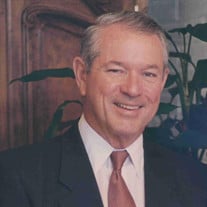 After a lifetime devoted to helping others, Dr. Charles Kenneth (Ken) Landrum left this earthly world, on the evening of Monday, February 22nd, surrounded by loved ones. A native of Kingsville, Ken was born on November 3, 1929 to William Miles Landrum and Ruth Pfannkuche Landrum. He graduated from King High School in 1946 and matriculated to Texas A & M University, earning a B.S. in biology in 1950. While at A&M, Ken was a member of the Corps of Cadets and the Ross Volunteers, and he served as Company Commander of E Air Force. Upon graduation, he was commissioned as a 2nd Lt. in the USAF Reserve. Kingsville served as the location for meeting his first wife, June Poteet. Spying her over a fence as she sunbathed in the summer of 1948, he made a point to find out who she was and to arrange an introduction. They dated despite being in different cities, she in Dallas and he in College Station, and married in 1952. Ken received his medical degree in 1954 from Baylor College of Medicine and completed his residency in Obstetrics and Gynecology at Baylor in 1957. He went on to serve as the Chief of the Department of OB-Gyn at Hunter AFB, Georgia, receiving an Air Force Commendation Medal for Meritorious Service in 1959. After another year in Houston working at Jefferson Davis Hospital, he and his family moved to San Angelo, Texas. He practiced at San Angelo Medical and Surgical Clinic until the end of 1963, when they returned to South Texas. Ken was in the private practice of Obstetrics and Gynecology in McAllen for the next thirty years, retiring in 1994. He and Dr. Dan Chester founded Landrum-Chester OB-Gyn Associates in 1966, a partnership that happened as the result of a chance meeting between Dan and Ken's father-in-law, Dr. Ernest H. Poteet, at a Rotary meeting in Kingsville. Dr. Poteet told Dan that Ken needed help in McAllen and suggested Dan look him up. Their partnership, friendship and mutual respect for each other was a model for all associated with both men. A lifelong contributor to his profession and his community, Ken was a member of the McAllen ISD School Board, The Texas Association of OB-Gyn, the American Cancer Society, the Hidalgo-Starr Counties Medical Society, McAllen Country Club, and the Tower Club, serving as President/Chairman of all of those organizations. He also served as the Founding Medical Director and Chief of Staff of Rio Grande Regional Hospital. At the age of 86, he was honored to receive the Distinguished Alumnus Award from Baylor Medical School for his lifetime of service. Ken, a Methodist from birth, was a member of First United Methodist Church - McAllen for 57 years, serving in virtually every capacity from Sunday School teacher to Chairman of the Board. In 1982, Ken joined the Board of Texas State Bank, which eventually became part of BBVA Compass where he continued his involvement for many years. After the loss of his first wife, Ken married longtime family friend Carolyn Cook in 1993. Together, Ken and Carolyn enjoyed traveling, spending time with family and friends, and being active contributors to the McAllen community. In 1998, Ken took on his most ambitious volunteer commitment, that of Chairman of the Board of the Vannie Cook Cancer Foundation. He was a driving force in obtaining a collateral agreement with Baylor College of Medicine and Texas Children's Hospital in 2003 to operate a first-class Pediatric Hematology and Oncology Clinic in facilities owned by the Cook Cancer Foundation. The clinic continues to help children in the Rio Grande Valley today, providing services for those with cancer and blood disorders. Ken is preceded in death by his parents, his sister, Dorothy Ruth Landrum Brown, and his first wife, June Poteet Landrum. He is survived by his wife of 28 years, Carolyn Vance Cook Landrum, his daughters, Leslie Landrum Kingman (Tom) of San Antonio and Mary Landrum Schuler (Lance) of Houston, his step-daughters, Kathy Cook Collins (Jim) of McAllen, and Carol Cook Dalton (Sam) of Dallas, and his sister-in-law, Anne Poteet Munk of Boerne. Known as their Bof-Bof, he also is survived by fifteen beloved grandchildren, Dr. Taylor Kingman (Codi), Hunter Kingman (Shannon), Trent Kingman (Ashley), Berkley Kingman Anderson (Campbell), Brooke Schuler, Jordan Schuler, Jennifer Collins Stone (Tyler), Will Collins (Jessica), Courtney Collins Tuttle (Barrett), Caroline Collins Badouh (Bo), Vannie Collins (Julia), Sam Dalton, Loring Dalton, Katie Dalton and William Dalton. He and Carolyn also share 22 precious great-grandchildren. The family would like to thank Dr. Tommy Yee; Ken's most recent care providers through Fernandez Care, Robert Briones, Josh Hernandez, Randy Rojas and Ayhan Suozer; and the staff at Amara Hospice for their loving attention A private family memorial service is to be held Monday, March 1st at 1:00 p.m. at First United Methodist Church - McAllen. The church has requested that attendance be limited to family only but your virtual attendance would be welcomed at the service on the FUMC McAllen YouTube channel accessed at https://www.youtube.com/channel/UClWPmYPhfYlOk0yynm2qCRg. Contributions in Dr. Landrum's memory may be made to the Vannie Cook Cancer Foundation (vanniecook.org), First United Methodist Church - McAllen (fumcmcallen.com), Snack Pak 4 Kids - San Antonio (SP4KSA.org) or to the charity of your choice.

After a lifetime devoted to helping others, Dr. Charles Kenneth (Ken) Landrum left this earthly world, on the evening of Monday, February 22nd, surrounded by loved ones. A native of Kingsville, Ken was born on November 3, 1929 to William Miles... View Obituary & Service Information

The family of Dr. Charles Kenneth Landrum created this Life Tributes page to make it easy to share your memories.

After a lifetime devoted to helping others, Dr. Charles Kenneth...