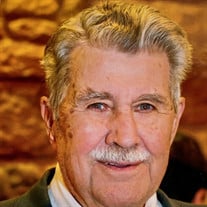 The Greatest Generation received a new angel on January 10, 2021 when WWII Veteran Don Leonard received his orders to report immediately to his new heavenly quarters .We expect his first assignment is organizing daily cheerful Happy Hours, a skill he honed here on Earth with his warm welcoming smile and a twinkle in his eye. Born on December 13, 1923 in his parents', Clarence and Minnie Leonard, Detroit home, he spent his youth during the Depression camping out West every summer with his teacher parents. When WWII broke out, he volunteered for the US Army in 1942, and was sent to fight on Leyte, Okinawa, the Philippines, and other tropical locations. After the war, he re-enrolled at Michigan Tech in Houghton, MI, where in addition to getting his degree in Chemical Engineering, he met a cute high-schooler named Margaret McClurkin. They quickly fell in love, and when Don sent Margaret an engagement ring on Christmas Day, 1949, Margaret's father responded that it was too bad she would have to send it back. She put the ring on, and demanded a wedding date. Her dad finally conceded that June 31st would be the date. After the initial joy disappeared when they discovered the trick, they agreed to July 6, 1950, and were married at Christ Church in Savannah, GA. They celebrated their 70th anniversary last July. Son Mark (Julie) was born in 1952, Don Jr (Pamela) in 1954, Lee (Penny) in 1958, and Midge in 1960. Don had a very successful career in sales due to his empathy, humor, and engineering ingenuity. He also volunteered for the vestry at St. John's Episcopal church in Youngstown, OH and directed the annual Boar's Head Festival. In the late 1960s, Margaret shamed Don into taking the family camping when she accused him of getting soft. He rose to the challenge and through annual summer camping trips, infused his children with a love of the outdoors and boating. One of his lifelong habits was tracking resource usage, like gasoline mileage and daily electricity usage. On one camping trip in the 1960s, we were driving down an open road when Margaret warned Dad about the gas level but Don assured all of us that we had 25+ miles to go. No sooner had he uttered that when the car ran out of gas and we were stranded! No, he never lived that down, and it was a constant source of family mirth. That may have been his biggest failure in his long life. As the children grew, the boys married off and had children of their own, and then some of their grandchildren had children. Mark's children are Lindsay, Austin, Keith, and Claire, and Keith's daughter is Isabella. Don and Pam's children are Brian (Katie) and Adam (McKinlee). Brian and Katie's children are Lucas and Reese and Adam's children are Kate and Graham. Lee's children are Brandon (Bobby), Lon (Melissa), and Takara. Brandon and Bobby's children are Charlie and Theo, and Lon and Melissa's children are Raylan and Deacan. When Don reached his 50s, he had a mid-life crisis. Not fast women and sports cars, but airplanes. He took flying lessons and got his license on his 55th birthday and promptly bought a Cessna 172, which he joyfully flew for business and pleasure for 13 years. Since that wasn't adventurous enough, he and Margaret decided to sell their home and most of their belongings in 1996 and purchased a Chevy Suburban and a 32' trailer, then set off to explore North America. They had a great time until crossing Iowa in 1999, when a near-tornado caught their trailer and sent it doing 360s into a cornfield. Dad's decision to install a break-away trailer hitch saved them from injury or worse. Rather than quit, they collected their insurance, bought a new trailer, and journeyed for another 5 years, making friends wherever they went. They finally settled down in their favorite wintering spot at Hidden Valley Ranch in Mission, TX, and no longer were snowbirds. Don joined the local VFW, got his concealed carry license and went shooting every month up until his last week. He and Margaret also joined St. John's Episcopal Church in McAllen where they were active members. Finally, because Don always wanted to serve, he started Heart Rangers in HVR, a group of volunteers on call 24/7 to help those in the community with immediate medical needs. Don and Margaret's patio became the de facto location for Happy Hour. Don's 97th birthday in December found the patio packed with so many well-wishers and imbibers that not even his children could get through to wish him happy birthday. Up until his last couple of days, the only medication Don took was eyedrops for his glaucoma. After Christmas, he started experiencing shortness of breath and consented to a doctor's appointment on January 8. His final words to Margaret as he left for his appointment were "Thank you for marrying me." For his entire life, Don loved his wife, his family, his community, and his country. Don's funeral, open to his friends and family, will be held at 11:00 AM , Thursday, Jan. 14, 2021 at St. John's Episcopal Church , 2500 N Tenth St, McAllen, and will also be live-streamed at https:// www.facebook.com/stjohnsmcallen, followed by military honors in the garden. Donations may be sent to St. John's Episcopal Church for the Food Bank in Don's honor.

The family of Don Leonard created this Life Tributes page to make it easy to share your memories.

The Greatest Generation received a new angel on January 10, 2021...