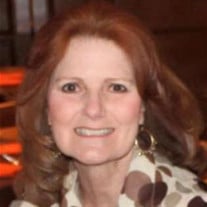 MCALLEN - Diana Lynn Stolpa, age 63, entered into Glory Saturday, September 10, 2016 at Amara Hospice. She was born on May 13, 1953 in Weslaco, Texas. During her school years, she was involved in cheerleading and sports, particularly basketball. She graduated as Valedictorian from Weslaco High School in 1971. After graduating with a degree in Biology and Chemistry from Pan American University in 1974, Diana taught Biology and coached girls’ basketball at McAllen High School. She moved to Houston, Texas in 1981 to "see more of the world." That’s where she met the love of her life, Jeffrey G. Stolpa, and they married in 1982. In May of 1984, they welcomed their daughter, Tracy Lynn, and shortly after, in October of 1985, welcomed their son, Jeffrey Lance. In 1994, Jeff took a job with the Circle K Corporation which brought her back home to McAllen, Texas. Diana began teaching at McAllen Memorial High School and worked there until she retired in 2012. During her 18-year teaching career at Memorial, Diana helped out with many school organizations and also made many lifelong, wonderful friendships. She and her friends often got together for after school functions. By living in the Valley, Diana and her family were able to enjoy Saturday lunches with Mamaw, Sundays at church with Lila and Don, and weekend cookouts with Debra and Doug and their family. They also enjoyed the large family gatherings at Christmas, usually at the Burns’. They made several trips a year to Houston to visit Jeff’s two sisters and their families as well as the lifelong friends they made while living there. After retirement, Diana enjoyed spending time in Houston with her daughter Tracy, son-in-law Kevin, and granddaughter, Payton. She loved cheering for the Dallas Cowboys, San Antonio Spurs, Houston Texans, Houston Astros, and Fightin' Texas Aggies! She was also an active member of the North Mission Church of Christ. Her survivors include husband Jeffrey Gene Stolpa, daughter Tracy Lynn Hill and husband Kevin and their daughter Payton; her son Jeffrey Lance Stolpa; sister Lila Burns and husband Don; brother David Waddell and wife Jennefer; twin sister Debra Schneider and husband Doug; sisters-in-law Debbie Stolpa and Jackie Morales and husband Diego; and many beloved aunts, uncles, cousins, nieces, and nephews. She was preceded in death by her parents, Myrle and Ellis B. Waddell and brother Major Dale R. Waddell. A Memorial Service will be held Saturday, September 17, 2016 at 3:00 PM at North Mission Church of Christ, 1410 E 3 Mile Rd., Palmhurst, Texas. Jeff LupPlace will be officiating. In lieu of flowers, the family requests that memorial contributions be made to the MD Anderson Cancer Center, P.O. Box 4486, Houston, Texas 77210, in memory of Diana Stolpa. “Her absence is like the sky, spread over everything.” ~ C.S. Lewis

MCALLEN - Diana Lynn Stolpa, age 63, entered into Glory Saturday, September 10, 2016 at Amara Hospice. She was born on May 13, 1953 in Weslaco, Texas. During her school years, she was involved in cheerleading and sports, particularly basketball.... View Obituary & Service Information

The family of Diana Lynn Stolpa created this Life Tributes page to make it easy to share your memories.