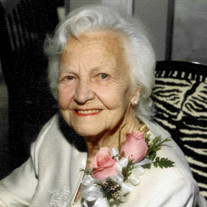 Diana Jones passed away on Wednesday, April 13, 2022. She died peacefully at home surrounded by her family. She was preceded in death by her husband Henry W( Bill) Jones in 1977, her father Franke Cooke, her mother Evelyn Nash, her brother Albert Cooke, and her beloved sister Ethel Monroe. Diana is survived by her son Bill (Jody) Jones of McAllen, her daughters Diana Lynne Chapman (Ray) of McAllen and Frances Jones Bradley (Mathew) of McAllen. She leaves behind her grandchildren Vivian Rowland (John), Blake Thomas (Patricia), Devin Thomas (Kimberley) as well as great grandchildren Taylor Rowland, Trevor Rowland, Cora Thomas and William and Andrew Thomas. She is survived as well by her nephew James Thomas Monroe of Berkeley, California, her niece Annie Windmeyer of San Antonio and her niece Diana Dusek of Wallis, Texas. Diana was born December 18, 1921 in Santiago, Chile where her father was working for the Braden Copper Company. She grew up in Santiago and attended school there, she went on to get a degree from Santiago Women's College and took a job as a school teacher in Rancagua, Chile, a mining town. It was in Rancagua where she met a handsome young man, Bill Jones, who happened to be visiting his sister Frances who worked at the Braden Copper Company in Chile. Diana was working as a school teacher in Rancagua and Bill was working in Rio de Janeiro setting up an office for the Brunswick Company. It didn't take long for Bill to propose to Diana and they were married in Rio de Janeiro in the spring of 1944. Living in Rio was exciting, they had an apartment across the street from Copacabana Beach and loved to travel. They would travel to Chicago or New York every year and they never failed to stop in Havana, Cuba for a few days on their way back to Rio. Bill and Diana moved to Mexico City with their young family (Bill Jr. and Diana Lynne) in 1952 where Bill was responsible for setting up the offices for Brunswick of Latin America. They enjoyed a wonderful life in Mexico City and soon expanded the family when Frances was born. They traveled extensively throughout Mexico ,but, Acapulco was their favorite destination to enjoy the beach and the wonderful fishing. Bill and Diana moved to McAllen in 1963 after Bill suffered a stroke and the doctors recommended that he move out of Mexico City. They chose McAllen because of its quiet pace and because they still had school age children. Diana took a job with Jones & Jones where she remained until her retirement in 1988. The family is deeply grateful for the outpouring of love, prayers and support from so many and would like to extend a very special thank you to Olivia Lopez for the loving dedication and care she provided our mother. Kreidler Funeral Home is handling the funeral arrangements. There will be a graveside service Saturday, April 16, 2022 at 11:00 A.M.at Roselawn Cemetery. In Lieu of flowers the family asks that donations be made to Easter Seals Society, McAllen, Texas.

Diana Jones passed away on Wednesday, April 13, 2022. She died peacefully at home surrounded by her family. She was preceded in death by her husband Henry W( Bill) Jones in 1977, her father Franke Cooke, her mother Evelyn Nash, her brother Albert... View Obituary & Service Information

The family of Diana Jones created this Life Tributes page to make it easy to share your memories.