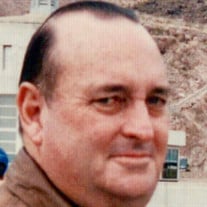 Dennis Duane Curl, 77, of Mission, Texas went to be with his Lord and Savior, Monday morning January 9, 2017 at his home. Dennis was born in Iowa to Irvin and Ethel Curl. He married Peggy Sue Ott, November 6, 1959. He and Peggy met in Amarillo, Texas while he was serving in the United States Air Force. They moved to the Rio Grande Valley in 1963 to be near family and he began his long and successful career in the air conditioning business. Having been born into a Midwestern farm family his love of agriculture, horses and cattle was passed on to his children and grandchildren. He and Peggy also had a cattle ranch in Central Texas where they enjoyed spending time with family and friends. They also enjoyed team penning and ranch sorting. They built an arena at their home so that friends and family could come visit and enjoy participating in ranch rodeo activities. He was an avid supporter of his children and grandchildren as well as other youth involved with the 4-H and FFA organizations. He was preceded in death by his wife, Peggy Sue Curl; his parents Irvin and Ethel Curl; brothers Robert Curl; Harold Curl and his wife, Mildred Curl. He was also preceded by brother-in-law's Marvin Bull and W. E. Anderson; nephews Russell Bull, Jeff Bull and Jerry Curl. He is survived by his son, Tim Curl and daughter-in-law Becky (Nordmeyer) Curl; daughter Debbie (Curl) Hanson and son-in-law Allan Hanson; sister Frances (Curl) Bull; sister Virginia (Curl) Anderson, sister-in-law, Mary Curl; and four grandchildren, Meridith and Marshall Curl, Colton and Kayla Hanson; as well as numerous nephews, nieces, cousins and friends who were all dearly loved by Dennis. The family will receive friends from 5-8 pm, Friday, January 13, 2017 at Kreidler Funeral Home in McAllen, TX. The funeral service will be at 10:00 am, Saturday, January 14, 2017. Burial will follow at Valley Memorial Gardens Cemetery. Pall bearers will be Colton Hanson, Marshall Curl, Tom Curl, David Curl, Kevin Curl and Chris Curl. In lieu of flowers, contributions may be sent to Cowboy Church of The Valley, P. 0. Box 796, Weslaco, Texas 78599, or a charity of your choice. The family would like to extend their heartfelt thanks to the many family and friends and, in particular the health care providers, Esther Gonzalez, Susanna Lee, Marylou Donis, Joey Espercueta, and Yolanda Solis for the loving care they provided the last couple of months.

Dennis Duane Curl, 77, of Mission, Texas went to be with his Lord and Savior, Monday morning January 9, 2017 at his home. Dennis was born in Iowa to Irvin and Ethel Curl. He married Peggy Sue Ott, November 6, 1959. He and Peggy met in Amarillo,... View Obituary & Service Information

The family of Dennis Duane Curl created this Life Tributes page to make it easy to share your memories.