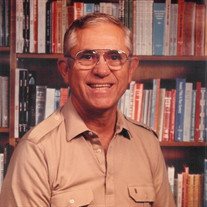 David Reyna entered eternal rest on Monday, June 6, 2016, D-Day. He had been a resident of Alfredo Gonzalez Texas State Veterans Home Since September 2012 and lost his battle with Alzheimer’s and Heart Disease. David was born in Sam Fordyce, Texas on April 9, 1925. After just one year of age his family moved to La Joya, Texas where he lived and was educated through High School. In June of 1943 he graduated from La Joya High School and immediately enlisted into the U.S. Navy to join his Brothers in Arms in World War II. He was stationed on the Island of Guam in the South Pacific from where he flew out on missions aboard a TBF Avenger Torpedo/Bomber as an Aviation Radioman/Gunner. He was awarded three Air Medals and a Presidential Citation. After the war ended he returned to La Joya to begin his life outside of military service in 1946. It was then that he met the young lady that took his heart, his future wife and love of his life, Elma Nora Rodriguez of Edinburg, Texas. They married in 1950 and shortly thereafter re-located to Detroit, Michigan in search of a better life. Together they created a family of four boys and raised them in Taylor, Michigan, a suburb of Detroit. In 1984 he retired from Ford Motor Company as a Material Handling Engineer and returned to the Rio Grande Valley. They settled in McAllen, Texas for the rest of their lives. Elma Nora preceded him in death on March 25, 2013. The accomplishments of Mr. David Reyna were honorable as a citizen. Before leaving La Joya, his favorite sport was Baseball and became a member of the first Semi-Professional Baseball Team in Edinburg, Texas, ‘The Edinburg All Stars’, from 1946-1949. In the early 1960’s he became an umpire and joined The Detroit Federation of Umpires where he advanced to umpiring AAA Baseball and remained a member of the Federation for 25 plus years. Returning to ‘The Valley’, he continued being an Umpire and became a member of The Southwest Umpires Association. He was honored at the 16th Annual Leo Najo Baseball Reunion and shortly thereafter, inducted into the Baseball Hall of Fame in Monterrey, N.L., Mexico. He umpired his beloved baseball until his late 70’s. He re-enlisted into the Naval Reserves in 1961-62 and achieved the rank of Chief Petty Officer and worked in Naval Intelligence until his retirement from military service in 1976. In 1984 in wanting to do something for his community in The Valley, he became a Foster Grandparent for the Down’s Syndrome children at Bowie Elementary School. He did so much for the kids including attending all of the Special Olympic events as a Volunteer. The kids all loved, “Mr. Reyna”. He visited the sick and the dying, took time to visit Nursing Homes once a week with Ramiro Zapata, and was always helping those in need of his care and time. He also volunteered his time to help in the founding of the Mission Historical Museum. David Reyna was a true Humanitarian. David is survived by his four sons and their spouses, David R. (Judy) of McAllen, TX, Ronald A. (Linda) of Wyandotte, Michigan, Daniel L. of Austin, TX and William G. ‘Bill’ Reyna of Toledo, Ohio. His Granddaughters, Kathy C. (Romeo) Garcia of McAllen, Jackie M. Reyna of Austin, Angela N. Reyna of Toledo, Grandson Matthew D. Reyna of Waterford, Michigan and his seven Great Grandchildren. On behalf of the Reyna family, we would like to give our praise and appreciation to Alfredo Gonzalez Texas State Veterans Home for the love, support and care that was given to our father during his stay at their facility. After nearly four years of caring for our father we will miss the entire staff as they have become family to us. Visitation will be held on Sunday, June 12, 2016 from 12:00 noon to 8:00pm with a rosary service at 7:00pm. Funeral Mass is on Monday, June 13, 2016 at Our Lady of Perpetual Help at 12:00 noon. Interment will follow at Valley Memorial Gardens in Mission, Texas at 1:15pm. In lieu of flowers, donations can be made to the Alzheimer’s Association.

David Reyna entered eternal rest on Monday, June 6, 2016, D-Day. He had been a resident of Alfredo Gonzalez Texas State Veterans Home Since September 2012 and lost his battle with Alzheimer&#8217;s and Heart Disease. David was born in Sam... View Obituary & Service Information

The family of David Reyna created this Life Tributes page to make it easy to share your memories.