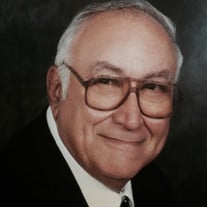 Dario Vidal Guerra, Jr. (D.V.), age 81, passed to a new life and entered eternal rest with the Lord on July 2, 2019, in EdInburg, Texas. He was born on January 7, 1938 in McAllen, Texas to Dario Vidal and Braulia Garcia de Guerra. He is survived by the love of his life and wife of 59 years, Maria del Carmen Robinson de Guerra, his five children, Dario Vidal Guerra III (Edelia) , J.E. “Eddie” Guerra (Norma), Maria del Carmen McDermott (David), Ricardo E. Guerra (Tina), and Luis J. Guerra; his 16 grandchildren; Shayna Dahlson (David), Brian, Kendall, Kaylynn, Krystianna, Andres, Laryssa Oswald (Kanon), Dominic, Loredo, Kristopher, Miguel, Vidal Arteaga, Enrique Arteaga, Caroline Flores, and Diego Arteaga. He was anxiously awaiting the birth of his first great-grandchild. He is preceded in death by his parents, his younger brother, Jaime, and his beloved daughter, Martha Guerra Arteaga (Gustavo), whom he spoke of almost daily. D.V., as so many knew him, graduated from McAllen High School. He received his Bachelor’s Degree in Agriculture in 1960 from Texas A&I University, Kingsville, Texas. After graduation, he was self-employed as a cattle rancher in San Manuel, Texas for most of his life. In 1978, D.V. and his family relocated to Edinburg, after their home in San Manuel burned down. It was here that he began a life devoted to the prosperity of the South Texas region he loved so much. Much of his life was spent serving on boards that specialized in land and water conservation. He served as the Director of the Hidalgo Soil & Water Conservation District for many years. He was part of a five-man task force sent to Peru as an agriculture advisor with the Texas Partner of Alliance with Peru. He also served the U.S. Secretary of Agriculture for 3 years, as a member of the Public Advisory Committee on Soil & Water Conservation. D.V. also served as Chairman of the Linn Farm Bureau for 4 years. He served on the Board of Directors of the Texas A&I Alumni Association. He was also Chairman of the Hidalgo County Program Building Committee, and in 1976, he was elected to the Edinburg Consolidated Independent School District Board of Trustees, where he served for 12 years. Some of his proudest moments were handing out high school diplomas to all 6 of his children and 4 of his grandchildren. For over 52 years, D.V. gave countless hours back to his community by volunteering at many local organizations, such as the Hidalgo County Historical Museum, the Heart Fund of Edinburg and Easter Seals, where in 2010, he was named the “Humanitarian of the Year.” D.V. was appointed to different positions serving the State of Texas by 4 different Governors; Bill Clements, Ann Richards, Rick Perry and George W. Bush. He served on the Governor’s State Rural Advisory Council, Governor’s Task Force in Agriculture, AmeriCorps Program, the Board of Directors of the Rio Grande Regional Water Authority and the Texas Water Development Board for 6 years. He also served 3 U.S. Presidents, Ronald Reagan, George H.W. Bush, and George W. Bush, as State Director of the Texas State Committee of the Farm Service Agency, which managed all of the federal monies allocated to agriculture in the state of Texas. In 1977, he was honored to be named “Man of the Year in Agriculture” by the Texas County Agriculture Agents Association. A man dedicated to education, agriculture, and children, D.V. served as a member of the 4-H Youth Foundation Board of Directors and as Secretary of the Tropical Texas Center for Mental Health and Retardation, “TTCMHMR”. He served as Chairman of TTCMHMR for 10 years. He served as President of the Rio Grande Valley Livestock Show, Inc. for 6 years and was a Director for more than 50 years. Here, he oversaw many scholarships awarded to young men and women from across the Valley. In 2010, he served as Grand Marshal of the 70th Annual Rio Grande Valley Livestock Show Parade. D.V. won many awards throughout his lifetime; most recently the Golden Eagle Award given by the RGV Hispanic Chamber of Commerce in March of 2019. All those who knew and loved D.V., knew him as a die-hard Texas Aggie. He enjoyed spending time at Texas A&M University, going to football games, Corps of Cadets activities, as well as attending the college graduations of many of his children and grandchildren. Visitation will be held on July 5th at 4:00 pm with a Holy Rosary to follow at 7:00 pm at Sacred Heart Catholic Church in McAllen. The funeral mass will be held on Saturday, July 6th at 10:00 am, also at Sacred Heart Catholic Church. D.V.’s eight grandsons will serve as honorary Pallbearers. A very special thanks to the Administration, Physicians and Nurses at Doctors Hospital Renaissance for the compassionate care they showed to D.V. and his family. In lieu of flowers, memorial contributions can be made to Easterseals Rio Grande Valley (easterseals.com). “In Memory of D.V. Guerra, Jr.”

Dario Vidal Guerra, Jr. (D.V.), age 81, passed to a new life and entered eternal rest with the Lord on July 2, 2019, in EdInburg, Texas. He was born on January 7, 1938 in McAllen, Texas to Dario Vidal and Braulia Garcia de Guerra. He is survived... View Obituary & Service Information

The family of Dario Vidal (D.V.) Guerra, Jr. created this Life Tributes page to make it easy to share your memories.