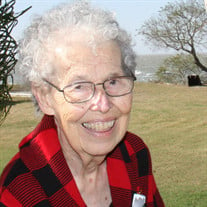 Coylie Elizabeth (Wheelberger) Koelle was born in McAllen in 1921 to George Franklin Wheelberger and Clara Emerick Wheelberger. She is survived by her niece JoAnn (Robert) Little, Rockport, TX; nephews Emmit A. Koelle, Jr. (Betty) of Bedford, TX and Donald W. Koelle of Kerrville, TX. She graduated from McAllen High School in 1938 and from McAllen Business College the following year. Her secretarial career included work for Valley Clay Products, Mission; R.W.Briggs Construction Co., Pharr; District Plant Secretary for Southwestern Bell Telephone Co.; and with Easter Seals Rio Grande Valley in McAllen. On August 8, 1955 Coylie and Clairmont Kenneth Koelle of Sharyland were married and worked together in C.K.'s farming operations. In later years they made their home in McAllen in the house built in 1912 by her father when McAllen was a tiny town with a great climate and future. Coylie was a long-time member of St. John's Episcopal Church, McAllen, where she was active in the Altar Guild and as a Charter member of St. John's Chapter of the Order of the Daughters of the King. She was a member of the Telephone Pioneers of McAllen, the McAllen Old Timers' Club, and the Hidalgo Co. Historica1 Society. The family thanks her caregivers, Raquel Ramirez, Iksumy Alanis, Esmerelda Salinas and her great niece Ingrid Little for all their loving care. Funeral service will be held at 1:30 pm, Saturday, October 22, 2016 at St. John's Episcopal Church. Burial will follow at Roselawn Cemetery in McAllen. Memorials, in lieu of flowers, may be made to St. John's Episcopal Church, 2500 N. 10th St., McAllen, TX 78501 or to Easter Seals Rio Grande Valley, P.O.Box 489, McAllen,TX 78505.

The family of Coylie Elizabeth Koelle created this Life Tributes page to make it easy to share your memories.