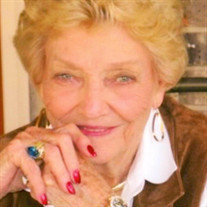 Conna Jean Newton Nye, beloved mother, grandmother, great grandmother, sister, and aunt, died peacefully on March 20, 2016 surrounded by her loved ones. She was born on October 24, 1932, in Santa Anna, Texas. Connie was the 5th born to the late Marion Alfred Newton and Gladys Johnson Newton of Clyde, Texas. She married the love of her life, attorney Frank Randall Nye, Jr. and moved to Rio Grande City, Texas. Together they raised their family and were very active members of the community. She was chairman of the American Red Cross, a major force at the Convent School, a Rio Grande City High School Band parent volunteer, Girl Scout troop leader, and her passion, a 4-H leader. She helped start the Starr County Youth Fair and was known to shampoo and dry many chickens and lambs to get them ready for the Mercedes Livestock Show. Connie was also involved in politics. A loyal and staunch political volunteer, she was her husband's biggest supporter when he ran and won elections for county offices. She had the honor of being asked to be a member of the Texas State Democratic Executive Committee, and in 1972, she was appointed by Governor Smith to the Good Neighborhood Commission. Connie was the owner of two gifts shops, The Market Place in Rio Grande City and The Market Place in Colorado. She had many hobbies, was an amazing artist, and could play the organ, piano, and accordion by ear. Everyone knew she had a love for remodeling homes, an eye for decorating, and a fondness for moving! She loved spending time at the ranch and could fish and hunt with the best. She is survived by her four children, William Alfred Nye and his wife, Yasmina, of San Antonio; Nancy and her husband, William Michael Comer, of The Woodlands; Raymond Randall Nye, Sr. of San Antonio; and James Lloyd Nye and his wife, Janice, of Mission; grandchildren, Randall Boone LaGrange and his wife, Holly; Cari LaGrange Murphy; Jennifer LaGrange Davenport and her husband, John; Harper Nye Hudsonpillar and her husband, Steven; Micajah Autry Nye; Daphne Nye Archer and husband, Jason; Megan Nicole Nye; Raymond Randall Nye, Jr.; Frank Randall Nye, III; and beloved great grandchildren, Taylor Murphy, Grayson LaGrange, Reilly LaGrange, Ellie Davenport, Reagan Davenport, Garrett Davenport, Aby Hudsonpillar, Jacob Archer, and Madeline Archer. She is survived by one sister, Jo Murray, and her family of Austin, Texas. She was preceded in death by her beloved husband, Frank Randall Nye, Jr.; baby daughter, Marian Jean; brothers, Lloyd Newton and James Newton; and sister, Marion Jean Jennings. Pallbearers are John Davenport, Carl Shuler, John Stoley, Dade Stoley, Jack Hart, Willie Aguilar, and Randy Waits. The family wishes to extend special thanks to caretakers Fina, Letty, Nieves, Gloria, Terri, Alexandra, Eva and the doctors and nurses at Renaissance Hospice for their compassion during our mother's illness. Memorial contributions may be made to Our Lady of Guadalupe Catholic Church, 620 N. Dunlap, Mission, TX 78572 Visitation will be held from 6-8 pm with a Rosary recited at 7pm, Monday, March 21, 2016 at Kreidler Funeral Home. Funeral Mass will be held at 11am, Tuesday, March 22, 2016 at Our Lady of Guadalupe Catholic Church in Mission, Texas, burial to follow at Valley Memorial Gardens Cemetery.

Conna Jean Newton Nye, beloved mother, grandmother, great grandmother, sister, and aunt, died peacefully on March 20, 2016 surrounded by her loved ones. She was born on October 24, 1932, in Santa Anna, Texas. Connie was the 5th born to the late... View Obituary & Service Information

The family of Conna Jean Nye created this Life Tributes page to make it easy to share your memories.