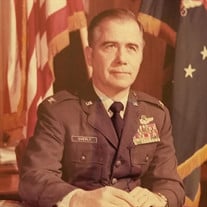 Norris Miller Overly Colonel Norris Miller Overly (Ret USAF) passed away on December 6, 2019 after a prolonged battle with laryngeal cancer. Norris was born in the fall of 1929 in Wheeling, West Virginia and, at a very young age, moved with his family to Detroit, Michigan where he was raised. He enlisted in the U.S. Air Force as an Aviation Cadet in May 1951, completing pilot training with the 3500th Training Squadron at Reese Air Force Base, Texas on June 20, 1952, where he was commissioned as a 2nd Lieutenant. After completing B-29 SuperFortress Combat pilot training in October 1952, he deployed to the Korean theater in support of the Korean War. From July 1954 to 1965 he piloted the KC-135 Stratotanker, among other aircraft, including an assignment as a flight instructor. During that time he was stationed at various Air Force Bases around the United States and its territories. In October 1962 while stationed at Ramey AFB, Puerto Rico, he stood on alert duty and participated in the Cuban Missile Crisis. In 1966 Major Overly was assigned to the storied 13th Air Force, 13th Bombardment, Tactical a.k.a. “The Devil’s Own Grim Reapers”. Norris attended 6 months of air to ground training in the deserts of Utah and Nevada to pilot the B-57 Canberra, a two seater, twinjet engine, tactical dive bomber before deploying to Clark AFB in the Philippines. From Clark AFB he was further assigned to the FOB at Da Nang AB and Phan Rang AB in South Vietnam in 1967 to fly strafe and strike missions by day and strafe and interdiction missions by night to halt communist aggression from North Vietnamese forces. He flew over 100 missions, about 20 percent of which were in Laos and Cambodia, before that fateful night on September 11, 1967 when his B-57 was shot down in enemy territory. Norris was instantly thrust into a brutal struggle for his very survival for the next seven weeks while his Viet Cong captors drug him through the jungles of North Vietnam, beating him, torturing him, humiliating him and starving him until his weight dropped from a normal 170 lbs. to just 115 lbs. before delivering him nearly dead and half naked to the door steps of the infamous HOA LO prison in Hanoi, a.k.a. The Hanoi Hilton. While in prison in Hanoi he endured further torture both physically and psychologically. One night months later his cell door was opened and a severely wounded and dying naval airman was laid on the cement floor. His name was John McCain. His captors told Norris “if he dies, you die”. Norris didn’t need to be told that, he got to work caring for McCain that very night. McCain could do nothing for himself due to his injuries. Norris managed and cared for McCain's wounds. Over the ensuing months McCain slowly regained his health and the rest is history. Along with two others, Norris was released in 1968 as a propaganda gamble by the North Vietnamese under amnesty due to global pressure to stop the torture of the POW’s. The gamble backfired on the NV as Norris told of the horrible conditions when he arrived back in the U.S. He was listed as MIA before his release and returned with the names of many other MIA’s helping to secure their survival as well now that the NV would have to be accountable for them. In 1971 he participated in the Paris Peace Talks in Paris, France while also attending the National War College at Fort McNair in Washington D.C. Colonel Overly retired from Norton AFB, San Bernardino, California in March 1979. Medals Colonel Overly has been awarded: Silver Star Medal Legion of Merit with one star Distinguished Flying Cross Air Medal with three oak leaves Air Force Commendation Medal with two oak leaves Purple Heart Medal Presidential Unit Citation with three oak leaves Air Force Outstanding Unit Award with two oak leaves Combat Readiness Medal Army Good Conduct Medal National Defense Service Medal with one star Korean Service Medal Vietnam Service Medal with three stars Air Force Longevity Medal with four oak leaves Small Arms Expert Marksmanship Ribbon United Nations Korean Service Medal Meritorious Service Medal with one oak leaf Republic of Vietnam Campaign Medal Over the course of Norris' lifetime he greatly enjoyed spending time with his family in the outdoors. Some of his hobbies included camping, fishing, trail riding and traveling to and exploring National Parks. Norris married Nola Ruth Bailey in May 1954. They shared 65 years of marriage together raising two children and moving 27 times over 18 years. Norris was proceeded in death by his siblings Robert, Fenton and Kate Liike and daughter (Debbie Padilla) and is survived by his wife Nola Ruth, son Norris Michael (wife Sandy) and three grandchildren, Emily Ehler, Capt. ( U.S. Army ) Norris Hunter Overly, Savana Lynn Overly, one great grandson, Miles Ehler, and sister Mary Lindsey. Norris also leaves numerous nieces and nephews throughout the country. A visitation will take place on Sunday, December 22 at 2:00pm immediately followed by a memorial service at 3pm at Kreidler Funeral Home, McAllen, TX.

Norris Miller Overly Colonel Norris Miller Overly (Ret USAF) passed away on December 6, 2019 after a prolonged battle with laryngeal cancer. Norris was born in the fall of 1929 in Wheeling, West Virginia and, at a very young age, moved... View Obituary & Service Information

The family of Colonel Norris Miller Overly created this Life Tributes page to make it easy to share your memories.