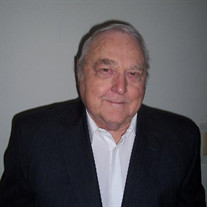 McAllen, TX. Clifford Walker “Bill” Matthews was born to Mr. William Burrell Matthews and Mrs. Electra Lottie Smallwood Matthews in Milledgeville, Georgia on September 4, 1925. Bill passed away on May 17, 2017 at the age of 91. He is predeceased by his parents, his sister Helen Matthews Fisher, his wife of nearly 50 years Margaret Lee Brand Matthews in 1997, and his daughter Deborah Ilee Matthews in 2003. Left behind to mourn his loss are his brother Harold and wife (Madge) Matthews of Rising Fawn, GA, son Wm. Stephen Matthews (Linda) of Manteca, CA, grandson Glenn Matthews of San Francisco, CA, daughter Teresa Matthews Cotman (Bill) and granddaughter Muriel Margaret Cotman of Cuero, TX, son John Scott Matthews (Bob Scheffler) of New York City, NY, granddaughter Margaret Angela Reyna of San Antonio, TX, and many nieces and nephews, all of whom he loved very much. Bill retired from the U.S. Army, as a Sergeant First Class, after 20 years of service. He was stationed in Atlanta, GA, Munich, Germany and Tampa, FL. Bill, Margaret Lee, and their 4 children relocated to McAllen, Texas, where Bill was employed by Griffin and Brand for more than 20 years as a dispatcher. After retirement, Bill enjoyed travel, time with family, and playing bridge with friends at the Community Center. Funeral Service will be held at Kreidler Funeral Home, 314 North 10th Street, McAllen, TX 78501 on Monday, May 22, 2017, starting with a visitation at 9:00 am, and a funeral service at 10:00 am with the Rev. Bill Cotman of First Presbyterian Church, Cuero, Texas presiding. Interment will follow at 11:00 am at Roselawn Cemetery, McAllen. Memorial contributions may be made to the Salvation Army, or the charity of one’s choice.

The family of Clifford Walker “Bill” Matthews created this Life Tributes page to make it easy to share your memories.