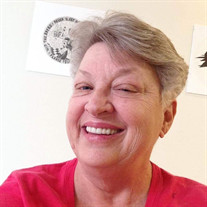 Cheryl Suzanne Stephens (nee Winters), of McAllen, Texas, died at the age of 68 on February 6, 2016, in Edinburg, Texas. She was born at Camp LeJeune, North Carolina, on April 5, 1947, to James E. and Mary L. Winters. She married Robert B. Stephens Jr. "Burt" in 1968; they were married until her death. While raising daughter Rasha and son Steve, she completed her bachelor's degree in history at the University of Maryland--Munich and earned her master's in library science at Catholic University in Washington, D.C. Suzanne worked for the U.S. Army for 14 years, during which she ran all of the Army libraries in Germany and set up their first electronic card catalog system. Later she worked as an alcohol and drug counselor in Ketchikan, Alaska, and as a high school teacher in La Joya, Texas. She loved to travel and was privileged to live in Germany for 13 years with her husband and children. She visited countries all over Europe, saw East Berlin before the wall came down, and saw the Soviet Union. For four years, she and Burt traveled in an RV throughout the continental United States, spending several years in Alaska. In 2000, they settled in McAllen to be near her parents. Suzanne is survived by her mother, Mary Louise Winters of McAllen, Texas; her husband Burt of McAllen, Texas; her daughter Rasha Kowalewski and son-in-law Butch of Eagan, Minnesota; her son Robert B. Stephens III "Steve", her daughter-in-law Shiloh, and her grandchildren Reagan Marie, Riley Suzanne, Ryan David, and Ruby Louise of Newark, Delaware. She was preceded in death by her brother Richard in 1994 and her father James in 2002. A memorial service was held on February 6, 2016, and her ashes will be interred in a niche at the Rio Grande Valley State Veterans Cemetary in a private ceremony on February 10, 2016. In lieu of flowers, please make a donation in her name to Mujeres Unidas via PayPal at mujeresunidas.org Mujeres Unidas is a non-profit organization that provides shelter and programs for women, men, and children who are victims of domestic violence and sexual assault. Daughter, wife, mother, aunt, librarian, counselor, teacher, and friend of Bill W. for over 24 years. She left us stunned with the strength of her love and in awe of the courage of her final fight. Sobriety gave her life clarity and purpose; her candor gave her the power to help others. She died on her own terms, and that is enough.

Cheryl Suzanne Stephens (nee Winters), of McAllen, Texas, died at the age of 68 on February 6, 2016, in Edinburg, Texas. She was born at Camp LeJeune, North Carolina, on April 5, 1947, to James E. and Mary L. Winters. She married Robert B.... View Obituary & Service Information

The family of Cheryl Suzanne Stephens created this Life Tributes page to make it easy to share your memories.