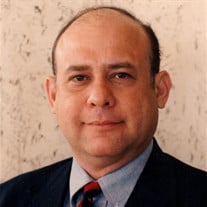 Charles Tamayo, Jr. went to the Lord on October 14, 2015. He was born on January 29, 1951 in San Benito, Texas. He is survived by his loving and devoted wife, Gloria Tamayo and his son Christopher Tamayo, his daughter Elizabeth & Travis Moss and his grandchildren, Patrick T. Nickalus T. Moss and Christopher Charles Tamayo, all of McAllen, Texas. He is also survived by his mother Zoila Reyna Garcia and step-father Francisco Brady Garcia, his brothers, Jaime & Linda Garcia, Javier & Eloida Garcia, of Edinburg, Texas, his sister Diana Garcia Snyder, of Dallas, Texas, his sister Alexis Tamayo Buhr, of Oelwein, Iowa, LaRue Tamayo Thompson, of San Antonio, Texas. He was preceded in death by his baby girl Erica Tamayo, his sister Ester Kim Tamayo, of Virginia, his brother Glen Tamayo of Iowa and his Father Charlie Tamayo of Iowa. Charlie received his degree in Business from Pan American University, he was the consummate salesman and entrepreneur. His business career took him on travels across Europe and Asia. But his best role was as a father and grandfather. His calling to contribute to his community was guided by his faith as a devout Catholic. Her served on the finance committee of Our Lady of Sorrows Catholic Church and oversaw the mass services at Our Lady of San Juan Basilica for many years. One of his shining moments was in his work in support of the Catholic TV channel EWTN. He worked tirelessly to garner more than 20,000 signatures in support of the station. He traveled to Medjugorje in the former Yugoslavia as a pilgrimage to the site of appreciation of the Virgin Mary. He had a mission to spread the Word. He will be missed by his family and the Catholic community of the Valley. We are confident that he is now envelope in the arms of the Virgin Mary who he loved and adored throughout his life. Visitation will be from 6-8pm, Rosary at 7pm on Friday October 16, 2015 at Kreidler Funeral Home 314 N. 10th Street McAllen, TX 78501. Funeral Services will begin Saturday October 17, 2015 9:30am Our Lady of Sorrows Catholic Church. Burial to follow at Roselawn Cemetery 1201n S. Main, McAllen, TX 78501

Charles Tamayo, Jr. went to the Lord on October 14, 2015. He was born on January 29, 1951 in San Benito, Texas. He is survived by his loving and devoted wife, Gloria Tamayo and his son Christopher Tamayo, his daughter Elizabeth & Travis Moss... View Obituary & Service Information

The family of Charles Tamayo Jr. created this Life Tributes page to make it easy to share your memories.