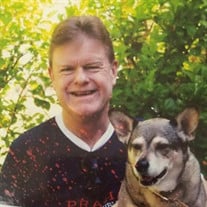 After a respectable life well-lived, Charles Patterson "Pat" Young succumbed to cancer after a brief illness on June 24, 2019. Pat undeniably embraced the words of Hunter S. Thompson, "Life should not be a journey to the grave with the intention of arriving safely in a pretty and well-preserved body, but rather to skid in broadside in a cloud of smoke, thoroughly used up, totally worn out, and loudly proclaiming "Wow! What a Ride!" The only child of the late Charles Duncan "Chuck" Young and Martha Elizabeth Patterson Young, Pat was born in McAllen on September 6, 1956. Until her end, Elizabeth always said Pat was her "greatest accomplishment," and his life-long devotion to her was unwavering. Pat attended Sharyland High School, where he was active in theater, tenth in his class, and a State Champion U.I.L. Informative Speaker in 1975. Following in the proud Patterson tradition, Pat graduated from Baylor University in 1979, where he was a member of Gamma Beta Phi and received the Cecil May Burke Award for most outstanding communications major. After college, Pat returned to the Rio Grande Valley and began his decades-long career in advertising, including stents with KURV, KGBT, KTEX, The Monitor, and the Valley Town Crier-Edinburg Review. Considered a "true newspaper man" by those who knew him best, Pat won an ADDY Award in 1987-1988 for copywriting and was a member of the Valley Advertising Federation, McAllen Citizens League, and a distinguished President and Director of numerous Kiwanis Clubs throughout South Texas. Pat's passions included sports, all things Baylor University, politics, news, cinema, and his family. His encyclopedic knowledge of movie trivia was unmatched, and he may be best remembered in the Valley as a long-time movie critic for various local newspapers. He was known to have a definite opinion on many subjects, as well as a quick wit and a compassionate spirit. He was preceded in death by his parents and uncles, J.W. "Bill" Patterson, Jr. and Harry Ward Patterson as well as his dog Sandy, Pat's loyal and trusted companion of 17 years. He is survived by his aunts, Edith Floyd Patterson and Betty Burkhart Patterson, and cousins, Bruce (Trish) Patterson, Jake (Marion) Patterson, Diane (Eddie) Marburger, Joe (Shawn) Patterson, Debbie (Randy) Davis, and their children and grandchildren. A Memorial Service will take place on Monday, July 1st at 11:00 am at Pat's home church, First United Methodist Church, McAllen, and funeral arrangements are entrusted to the care of Kreidler Funeral Home. A few years back, in the movie ROCKY BALBOA (2006), Sylvester Stallone's character is trying to inspire his son to never give up, Rocky said, "You, me, or nobody is gonna hit as hard as life. But it ain't about how hard ya hit. It's about how hard you can get hit and keep moving forward. That's how winning is done!" In that regard, Pat undoubtedly won at life, because he lived life to the fullest-- on his own terms. In lieu of flowers honorary donations can be made to Laurie P. Andrews PAWS Center, 2451 N. Expressway 281, Edinburg, TX 78541, Baylor University Department of Communications Excellence Fund, One Bear Place #97368, Waco, TX 76798, or First United Methodist Church, 4200 N. McColl Rd, McAllen, TX 78504.

After a respectable life well-lived, Charles Patterson "Pat" Young succumbed to cancer after a brief illness on June 24, 2019. Pat undeniably embraced the words of Hunter S. Thompson, "Life should not be a journey to the grave with the intention... View Obituary & Service Information

The family of Charles "Pat" Patterson Young created this Life Tributes page to make it easy to share your memories.