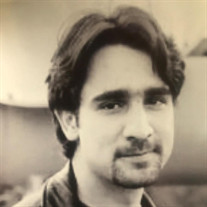 On Sunday, July 5, 2020, Charles Edward Cano, the kind and loving son of Eddie and Jan Cano, and brother to Aaron Louis Cano (and his wife Jessica Cano), John “Robert” Cano, and Allena La Rue Cano, and uncle to Anika LaRue Guerra, Ayla LaRue Guerra, Lucas Aaron Guerra, and nephew to David and Wanda Pierce, passed away in McAllen, Texas at the age of 42 of congenital cardiomegaly (congenitally enlarged heart). He is preceded in death by both set of grandparents, Juan and Evelyn Cano and Edmon and Wanda Pierce, uncle Bryan Pierce and aunt Betty Pierce, and uncle Gilbert Cano, and aunt Claire Dacy Cano. Charlie was an extraordinarily bright and talented young man who achieved great academic and professional success that truly impacted the technological world. In addition to his intellect, Charlie was the epitome and embodiment of “unconditional love,” “friendship,” and “empathy,” and he openly shared it with his family, friends, co-workers, and really, everyone. He loved with all his heart and soul. Charlie attended South Texas ISD Science Academy in Mercedes for his first two years of High School, after which, at the age of 15, he was recruited to attend the selective Texas Academy of Math and Science (TAMS) program at the University of North Texas in Denton. TAMS is an accelerated program where talented high school students finish their last two years of high school and first two years of college simultaneously. Admission to TAMS is based on SAT scores, grades, references, and a capacity to succeed in college-level work in the fields of mathematics, science, and engineering. When Charlie attended TAMS, it was fully funded by the State of Texas, not tuition based. Charlie assumed numerous leadership roles while at TAMS and was selected by both his peers and staff to be the TAMS Student Commencement Speaker for his graduating class in 1996. Charlie was offered scholarships to several top technological universities; however, he attended the best, Massachusetts Institute of Technology (“M.I.T.”) in Boston, Massachusetts. He graduated in two years with a degree in Electrical Engineering and Computer Science in 1999 at the age of 20. Charlie was a member of M.I.T.’s Phi Kappa Sigma fraternity. Upon graduation from M.I.T., Charlie went straight to work and was part of several startup companies including Bang Networks in 1999 based in California, where he was the Software Architect from 2000-2002. Thereafter, he moved to New York and was the Sr. Architect for F5 Networks from 2003 to 2014. Charlie’s last corporate employment was with AVI Networks as the MTS Software Engineer from 2014-2017 in New York. Charlie was in the process of going into business for himself in Texas at the time of his death. He was highly respected as a pioneer and leader in the technology field, speaking publicly at large conferences around the world and was regularly sought for his opinions by Fortune 500 companies. Charlie once presented his company’s computer security products to the federal government by hacking into their system during his presentation. Charlie leaves a large foot print in the “virtual clouds”; he had the impressive accomplishment of 7 U.S. Patents and the recipient of numerous awards, including Technology Innovator of the Year in 2010. Eddie Cano, Charlie’s Dad, often joked that Charlie would do well because he was a “nerd with people skills”. Charlie had many passions including film/movies, music, art, food and often incorporated those passions with technology. His interest in technology began as a child fascinated with “how did they do that”, aka, special effects, in the making of movies. Charlie taught himself to play the piano and guitar by ear. Like a horse of many colors, Charlie had many sides and faces to him, constantly changing his appearance and expressing himself with fun and happy hats. He was a soulful and thoughtful writer, blogger, and journaler before it was cool. His writings and work will truly live on. The one thing we know he inherited from his family, was his playful sense of humor, or as we call it, the “sense of the ridiculousness” and others call it “a sick sense of humor”. In addition to family, Charlie is survived by so many friends, too many to list by name, but whom were as close and meaningful to him as any family member. You all know who you are. As much of a shock as it was that Charlie passed, it almost comes as no surprise that he passed because his heart was literally and figuratively too big. Due to the Covid crisis and the inability for family and friends to travel, the family is opting to have a family only private Celebration of Life service for Charlie Cano, which will be videoed, and uploaded (very fittingly) to “the cloud”; of course. On Tuesday, July 21, 2020 at 7 p.m., in honor of Charlie, play some good music, eat a large bowl of ice cream, and tell someone you love them. Written by: Allena Cano

The family of Charles Edward Cano created this Life Tributes page to make it easy to share your memories.