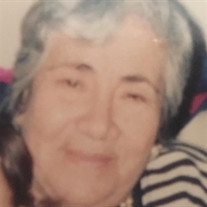 Celsa Magdalena “Nena” Hernandez died of natural causes on Sunday, April 17, 2016 at the home of her eldest daughter, Norma (Juan) Villanueva, surrounded by her family. She was preceded in death by her husband, Felix and sons; Felix Gilberto and Luis Fernando. She would have celebrated her 89th birthday on April 26. Celsa grew up in Roma, attended Roma schools and graduated at the age of 16 to allow her to attend business school with her older sister, Lourdes. After finishing business school she took the oath to work with the Post Master in Elsa, TX. Celsa and Felix were married on December 31, 1948. They had nine children, three boys and six girls. Together they enjoyed their hobby of gardening, especially roses and gardenias. Celsa loved to grow plants from seeds and cuttings and was almost always successful. She treated her plants with the same kind of care she lovingly have to her children and grandchildren. Family members have a wonderful memory of calling home and when asking “Poppy Felix” where “Mommie Nena” was, he would say “Anda afuera peliando con las hormigas” which meant she was outside tending to her roses, making sure they were healthy and blooming. She will always be remembered as being attentive, concerned, generous, and reservedly affectionate and extraordinary health-minded talented cook. Celsa is survived by her six daughters, Norma (Juan) Villanueva, Grace (C.D.) Lawson, Judi, Mary, Irma and Patty; and by her eldest son, Cali. She was supportive of the endeavors of her children, grandchildren, great grandchildren, nieces, and nephews and will be greatly missed. Eventually that sadness and heavy heartedness will be overcome and softened by feelings of gratitude and happiness for having had such a truly beautiful person in our lives.

Celsa Magdalena &#8220;Nena&#8221; Hernandez died of natural causes on Sunday, April 17, 2016 at the home of her eldest daughter, Norma (Juan) Villanueva, surrounded by her family. She was preceded in death by her husband, Felix and sons; Felix... View Obituary & Service Information

The family of Celsa Magdalena Hernandez created this Life Tributes page to make it easy to share your memories.