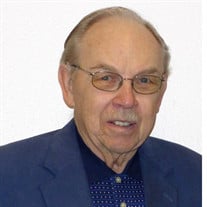 Cedric (Swede) Pearson, 78, of McAllen, Texas (formerly of Windom, Minnesota), passed away peacefully on Wednesday, December 07, 2016 at the Amara Hospice in McAllen. Swede was born in St. James, MN to Theodore and Carine Pearson and in 1961 married the love of his life Sally Smith. He proudly served our country in the US Army with the 1st Calvary Division stationed in Korea from 1961 to1963. Swede and Sally resided in Windom until 1982 when they moved to McAllen. He worked almost 40 years for Peterson Construction and retired in 2000. Swede is survived by his lovely wife of 55 years Sally, daughter Janeen Pearson, son James (Cindy) Pearson, 6 loving grandchildren, Anthony, Alyssa, Aaron, Alex, Lauren and Thomas, one great grandchild, Jalen and many nieces, nephews and extended family. Swede was a loving husband, father, grandfather and friend to all. Swede was a passionate man who enjoyed his construction career, auto racing and singing in the church choir. In retirement he enjoyed building ornate wooden cars, trucks, trains and furniture as well as playing cribbage and traveling with Olson Tours. He was preceded in death by his parents, sisters: Marian, Susan and brother: Ted. He will be deeply missed and happily remembered by his family and friends. Visitation will take place on Sunday, December 11, from 6:00 to 8:00 PM at the Kreidler Funeral Home, 314 N 10th St. McAllen, TX 78501. Funeral Service will be held on Monday, December 12 at 10:00 at Calvary Baptist Church, 1600 Harvey St, McAllen, TX 78501. Private Burial service will be held at RGV State Veterans Cemetery following the service. Memorial donations may be made in Cedric’s name to the Gideon Society, PO Box 2671, McAllen, TX 78502.

Cedric (Swede) Pearson, 78, of McAllen, Texas (formerly of Windom, Minnesota), passed away peacefully on Wednesday, December 07, 2016 at the Amara Hospice in McAllen. Swede was born in St. James, MN to Theodore and Carine Pearson and in 1961... View Obituary & Service Information

The family of Cedric (Swede) Pearson created this Life Tributes page to make it easy to share your memories.