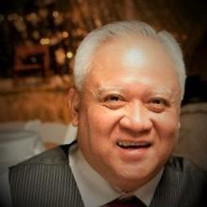 Cecil “Bobong” Enriquez De la Cruz, 60, passed away peacefully April 13, 2019, in McAllen, Texas, surrounded by many loving family members and friends singing hymns and praying over him. He was a devoted husband to Maria Teresita “Tess” De la Cruz. They shared 35 years of marriage and 9 years of courtship and engagement. Cecil was born November 19, 1958, in Zamboanga City, Philippines. He was the son of Gregorio De la Cruz & Pura Enriquez, and was part of a long line of prominent farmers, ranchers, business people and community leaders in the Labuan and Ayala communities. Cecil was a full academic scholar, a member of the Beta Sigma Fraternity, and an officer in the Corps of Cadets at the prestigious Mindanao State University. Cecil was an engineer for the renowned Zamboanga City Water District and an active member of the World Wide Church of God (currently United Church of God) before immigrating to the United States in 1990. Cecil loved to travel with his family, specifically to church conventions around the world, where he enjoyed exploring new cities, eating good food, and sharing in fellowship with his brethren. Most of all he loved to praise God and was passionate about spreading the Good News of Jesus Christ to any that would listen. He was a proud father, loving grandfather, supportive husband and loyal family member to those who remained in the Philippines. He will be remembered for his steadfast faith, overflowing generosity, and the immeasurable love he had for friends and family. He is survived by his loving wife, Tess, his son, Christian & daughter-in-law Audrey De la Cruz, his granddaughter, Rose, his younger brother, Gregorio De la Cruz Jr., and his sisters, Maria Teresa De la Cruz Lim & Maria Carmen De la Cruz & Mercedita Enriquez Domingo & Esther Enriquez. He is preceded in death by his older brother, Ramon Enriquez, his father, Gregorio De la Cruz, and his mother, Pura Enriquez. Cecil’s celebration of life will begin with visitation and prayers held on Wednesday, April 17, 5:00-6:00pm, at the Kreidler Funeral Home. The Memorial Service will be held immediately after from 6:00pm-8:00pm in the chapel followed by a small reception afterwards. The burial will take place at Forrest Lake Cemetery in Zamboanga City, Philippines. Time and date will be announced as soon as travel arrangements are finalized. The De la Cruz family would like to thank all of the friends, family, co-workers, and church family who have stepped in so generously through this difficult time with their support, love, and prayers.

Cecil &#8220;Bobong&#8221; Enriquez De la Cruz, 60, passed away peacefully April 13, 2019, in McAllen, Texas, surrounded by many loving family members and friends singing hymns and praying over him. He was a devoted husband to Maria Teresita... View Obituary & Service Information

The family of Cecil “Bobong” Enriquez De la Cruz created this Life Tributes page to make it easy to share your memories.