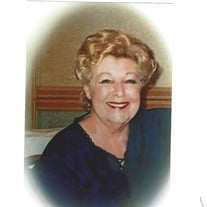 McALLEN — Carol Lee VanRamshorst (74) was called to eternal rest Thursday, October 22, 2015. Carol was born in Los Angeles and grew up in Southern California. She loved showing her horses, riding them in parades, and barrel-racing them. After high school graduation, Carol appeared in many amateur musicals and dramatic productions including the Whittier Light Opera productions of “Kismet”, “Gentlemen Prefer Blondes”, and “Anything Goes”. Carol’s singing, dancing, and acting capabilities were enjoyed by a wide range of audiences and she performed in a production of “Guys and Dolls” as Miss Adelaide. She performed for local benefits and for armed forces shows. Her singing talent led to several radio and television appearances and her recording with Laurali Records. In California, Carol met and married Donald J. VanRamshorst. She moved from California to McAllen in 1977, with Don and their two children, Donald, Jr., and Donalee. In McAllen, Carol, always an outgoing personality, loved socializing on Tuesday and Thursdays with her friends. She became involved in the local political scene and worked in Mayor Othal Brand’s and President George Bush’s political campaigns and the Hidalgo County Republican Party Headquarters in the eighties and nineties. Carol served as the Republican Primary Administrator for the Hidalgo County Republican Party (1989-1992). Carol loved animals, music, singing, dancing, and as an only child, she took care of her parents and grandparents. She volunteered at the Hidalgo County Humane Society in the eighties and was an active participant in the Palm Valley Kennel Club. As a kennel club member, she volunteered to teach obedience classes for a number of years and assisted Palm Valley Kennel Club in sponsoring and staging dog shows at the Bay Front Plaza Convention Center, Corpus Christi. Carol was predeceased by her husband, Donald J. VanRamshorst, Sr., and her parents, Harold and Gladys Waring. Carol is survived by her son, Donald J. VanRamshorst, Jr.; her daughter, Donalee VanRamshorst; her granddaughter, Lindsey Hernandez (Jonathan); and two great-grandsons (Johnny and Ryder). She is also survived by her four pet children. Carol will be missed by many; she was one of a kind. She was witty, beautiful, feisty, and outspoken. She had a sense of humor that brightened everyone’s day. Carol is in peace where she will be sharing her sense of humor. A memorial service will be held at 11:00 a.m., Saturday, November 7, 2015, at Kreidler Funeral Home, 314 N. 10th Street, McAllen. In lieu of flowers, donations may be given to Palm Valley Animal Center (Edinburg) or to your favorite pet rescue charity.

McALLEN &#8212; Carol Lee VanRamshorst (74) was called to eternal rest Thursday, October 22, 2015. Carol was born in Los Angeles and grew up in Southern California. She loved showing her horses, riding them in parades, and barrel-racing them.... View Obituary & Service Information

The family of Carol Lee VanRamshorst created this Life Tributes page to make it easy to share your memories.