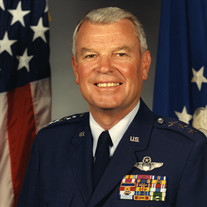 Lieutenant General Buford Derald Lary, USAF (Ret.), passed away in McAllen, TX on September 28, 2019. He was 85 years old. Lt. Gen. Lary grew up a South Texas boy and for 29 years had made his home in McAllen, where he loved the community and made many good friends. He directed the construction of the current McAllen Airport and the Bus Station, both of which have contributed to McAllen’s prosperous growth. Born in Gatesville, TX, in 1933, he graduated from Mission (Texas) High School. He received a bachelor's degree in business administration from Baylor University in 1954 and a master's degree in the same field from the University of Oklahoma in 1970. He completed Squadron Officer School in 1961, Air Command and Staff College in 1967 and the Royal College of Defense Studies, London, England, in 1974. Lt. Gen. Lary retired from the U.S. Air Force in 1989 after more than 35 years of service, during which he served in many key command and managerial positions. He was commissioned as a Second lieutenant in the United States Air Force, 1954. He married Mary Frances (Hoffer) Lary in 1954. The first of three children, Buford Derald Lary Jr., was born in 1957 in Fukuoka, Japan. Over the next eight years, the family grew with the birth of son William Britton Lary in 1959 and Jean Ann Lary in 1965. From July 1987 to his retirement in September 1989, Lt. Gen. Lary served as the Inspector General, United States Air Force. His main responsibilities were anti-terrorism, counterintelligence, security, inspection, and flight ground safety. Prior to that, from July 1985 to July 1987, he was commander, first Air Force, and concurrently Commander of the CONUS NORAD Region. From July 1983 to July 1985, Lt. Gen. Lary served as the Senior Military Assistant to the Deputy Secretary of Defense. From June 1982 to July 1983, he was a Deputy Assistant Secretary of Defense for Legislative Affairs, after being the Air Force Deputy Director of Legislative Liaison from April 1981 to June 1982. From December 1973 to March 1981, he was in Europe, first as a student at the Royal College of Defence Studies, London, then at wing-level assignments culminating in command of a reconnaissance wing and later an F-111 fighter wing. His final year in Europe, he served at HQ USAFE as the Assistant Deputy Chief of Staff for Operations and Intelligence. General Lary was a command pilot and was checked out in the B- 47, RF-4, F-5, F-111, F-15, F-16, Gulfstream III and the Lear-35. As the inspector general, he flew the C-5, C-141, KC-135, B-52, B-1 and the Mirage 2000. His overseas experience included Japan, Thailand, South Vietnam, England and Germany. After his retirement, Lt. Gen. Lary wished to return to Texas and was fortunate to have the opportunity to be the Director of Aviation for the city of McAllen, Texas from April 1990 to April 2005. After retirement from the city of McAllen, he was busy with many other personal endeavors and was a board member of the McAllen Country Club and was president of that board from September 2012 until September, 2013. In 2015, General Lary met and married his wife Marilew (Cunningham) Sturgis Lary. They shared his remaining years traveling and spending time with many close friends. Lt. General (Ret) Buford Derald Lary is survived by his loving wife, Marilew Sturgis Lary; his son Lt Col (Ret) Derald Lary Jr and his wife Colonel (Ret) Debbie Lary and daughter Jean Ann Baird and her husband Robert Baird, along with step-sons James H. Sturgis, his wife Gloria Sturgis and Josh L. Sturgis (Olympia Vega); grandchildren Jeremiah Lary and Shelby L. Sturgis; and great-granddaughter Miah Star Lary. He was preceded in death by his wife Mary Frances (Hoffer) Lary in 2014 and son William Britton Lary in 2010, his Father Buford Britton Lary and his Mother Cora Annette (Morgan) Lary. A memorial service will be held 10:00 am Friday, October 4, 2019, at the First Presbyterian Church in McAllen, and family will receive guests at the McAllen Country Club after the service. Kreidler Funeral is handling local arrangements; interment is to be held at a later time at Arlington National Cemetery. In lieu of flowers, the family requests that donations be made in Lt. Gen. Lary’s name to the Vannie E. Cook Jr. Cancer Foundation, 101 W Expressway 83, McAllen, TX 78503.

Lieutenant General Buford Derald Lary, USAF (Ret.), passed away in McAllen, TX on September 28, 2019. He was 85 years old. Lt. Gen. Lary grew up a South Texas boy and for 29 years had made his home in McAllen, where he loved the community and... View Obituary & Service Information

The family of Lt. Gen.. Buford Derald Lary, USAF (Ret) created this Life Tributes page to make it easy to share your memories.