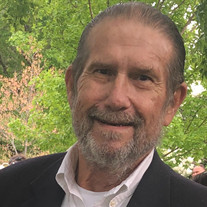 Mr. Byron Buck Pettitt, Jr., formerly of McAllen TX but last living in Fort Worth, passed-on on Sunday, July 12, 2020 at the age of 76. Due to the Covid-19 crisis, the family is just now able to have a Celebration of his life. Buck was born to parents Byron Buck Pettitt and Dorothy Ann Morcock Pettitt on February 4, 1944 in Houston, TX. His mother died from complications in childbirth due to a penicillin shortage during WWII. His father remarried, and Buck was thereafter raised by his father and who he fondly knew as his mother, Jymme Pettitt. He was raised in Houston, moved briefly to Chicago, and then returned to Houston and graduated from Lamar High School in 1962. He married his high-school sweetheart, Penny Sue Hull in 1966, and they would have celebrated their 54th anniversary in September of 2020. Buck graduated from the University of Houston Law School and was licensed in 1970. He was eventually licensed all the way up to the Supreme Court of the United States. He practiced in Houston until 1977, at which time he moved his family to McAllen and stayed there until his retirement to his Hill Country ranch. Buck was known as a fierce trial lawyer unafraid to try any case. In fact, he even tried 38 jury trials in a one-year time span—most trial lawyers do not try that many in an entire career. He was tremendously respected by his peers as evidenced by his many governing positions held in the Hidalgo County Bar Association, the Rotary Club, and others too numerous to list. He and his family were particularly proud of his AV “Preeminent” Peer Review Rating recognizing Buck for his legal ability and ethical standards. Despite his legal acumen, Buck’s main focus was on his family, and he was a tremendous provider not only of necessities, but of opportunities such as travel and education. His grandkids affectionately called him “Fuzzy.” Outdoor BBQ’s with dear friends and family was his trademark, and he was known as a fiercely loyal friend. Fishing was a must. Laughter abounded. In his later years, his focus shifted to that of being a steadfast caregiver for Penny, the love of his life. Buck is survived by his wife, Penny; his son Anthony N. “Tony” Pettitt and wife Amy Jo Pettitt and grandkids Tanner (18) and Elle (18); his son Alexander H. “Alex” Pettitt and wife Amanda Lynn Pettitt and grandkids Lainey (15) and Lexi (12); his sister Julia “Judy” P. Phillips, nephew Dean Phillips and niece Diane Reagan; his brother Bernard Montgomery “Monte” Pettitt, sister-in-law Jean Pettitt, and niece Lillian Pettitt; his sister-in-law Ruth Meyers, nephew Frank Grazier, and nephew Clint Grazier, and numerous friends that he considered as his family. His remains will be placed in the columbarium at Buck and Penny’s church, St. John’s Episcopal. The service will be held at 2:00 p.m. on Saturday, July 24 and will be officiated by Father Rod Clark. In the meantime, the Pettitt Family is grateful for condolences and asks that Buck be remembered at the next BBQ attended or the next time a fish is caught. While certainly unnecessary, those desiring to make a donation are encouraged to do so to the Alzheimer’s Foundation of America. Kreidler Funeral Home, Inc. of McAllen is in charge of the arrangements.

Mr. Byron Buck Pettitt, Jr., formerly of McAllen TX but last living in Fort Worth, passed-on on Sunday, July 12, 2020 at the age of 76. Due to the Covid-19 crisis, the family is just now able to have a Celebration of his life. Buck was born... View Obituary & Service Information

The family of Buck Pettitt created this Life Tributes page to make it easy to share your memories.