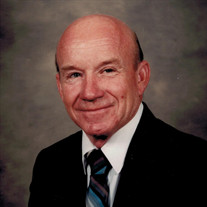 McAllen:Bradford D. Hart, 85, went home to be with the Lord on Tuesday, February 2, 2016. He died peacefully surrounded by his family. He was born on October 26, 1930 to Milburn and Edna Mae Hart in Rosston, Arkansas. He was preceded in death by his parents and one brother, Jimmie D Hart. Brad grew up in a farming community near Rosston, Arkansas with Christian parents and one brother. He graduated from the University of Arkansas in 1952. He taught high school science in Magnolia, Arkansas for one year. He then began work for the United States Department of Agriculture as a food inspector. He worked assignments all over the United States. The eight years before retirement he was the supervisor for the Weslaco, Texas area office. After 33 years of work with the U.S. government, Brad retired in 1987. After retirement he continued to work with the food industry in Texas, Arkansas, and in Mexico. On May 1, 1954, he married his loving wife, Alene (Mike) Jolly. They would celebrate 62 years of marriage this year. Brad loved his church and was a very active member of First Baptist Church in McAllen. He was a deacon, a Sunday school teacher, and choir member for many years. We want to thank the nurses and doctors at Doctors Hospital at Renaissance in MICU for the care and compassion they showed to Brad and his family during his illness. A heartfelt thank you to Gracie Alonzo, Irma Flores, and Eloisa Mares for the excellent care they gave to Brad in the past year. Brad is survived by his wife, Alene (Mike) Hart; two daughters, Deborah Pace (Tony) and Catherine Copple (Garry); six grandchildren, Michael Pace, Jason Pace (Kristen), Bethany Pace, Jessica Kelley (Kris), Jacob Copple (Summer), and Hannah Jefferson (Jamal); and two great-grandchildren, Joe Pace and Jaden Korsun. A visitation will be Thursday, February 4 at Kreidler Funeral Home in McAllen from 6:00 - 8:00 pm. Funeral service will be on Friday, February 5 at 11:00 am at First Baptist Church in McAllen. Burial will follow at Roselawn cemetery in McAllen. In lieu of flowers, donations may be made to First Baptist Church, nursery and pre-school department.

McAllen:Bradford D. Hart, 85, went home to be with the Lord on Tuesday, February 2, 2016. He died peacefully surrounded by his family. He was born on October 26, 1930 to Milburn and Edna Mae Hart in Rosston, Arkansas. He was preceded in death... View Obituary & Service Information

The family of Bradford D. Hart created this Life Tributes page to make it easy to share your memories.