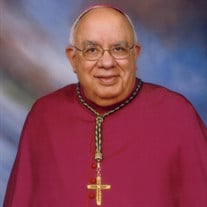 February 19, 1934 – September 24, 2021 SAN JUAN, Texas – Bishop Emeritus Raymundo J. Peña, who led the Catholic Diocese of Brownsville for 14 years before retiring in 2009, passed away Sept. 24, 2021. He was 87 years old. Bishop Peña passed away at San Juan Nursing Home on the grounds of the Basilica of Our Lady of San Juan del Valle-National Shrine. Born in 1934 in Robstown, Texas, he was ordained a priest in 1957 in Corpus Christi, Texas. He served 19 years as a priest in the Diocese of Corpus Christi, which included the Rio Grande Valley until the Diocese of Brownsville was created in 1965. In 1976, he was named auxiliary bishop in the Archdiocese of San Antonio. He was 42 at the time, making him one of the youngest bishops in the country. He was only the fourth Hispanic in the United States to become a bishop. In 1980, Bishop Peña was appointed the fourth bishop of the Diocese of El Paso, serving for 15 years there until his installation as the fifth bishop of the Diocese of Brownsville in August 1995. His motto as bishop, “Haz todo con amor” – “To do all things in love of Christ,” was taken from 1 Corinthians 16:14. Among Bishop Peña’s accomplishments in the Diocese of Brownsville: working to increase the number of vocations to the priesthood. By the time of his retirement, he had ordained almost half the diocesan priests and nearly tripled the number of seminarians; establishment of the San Juan Diego Ministry Institute in San Juan for training future permanent deacons and lay ecclesial ministers; establishment of a diocesan Immigration Office in San Juan; inclusion of women in leadership positions in the diocese and diocese-related entities; the designation of Our Lady of San Juan del Valle Shrine as a national shrine in 1998 and as a minor basilica in 1999. After his retirement, Bishop Peña stayed in the Rio Grande Valley where he maintained a busy schedule. Until falling ill this month, he celebrated Mass almost daily at the St. Joseph Chapel of Perpetual Adoration in Alamo and organized weekly Holy Hours for vocations there. Until recent years, he heard confession and celebrated Mass on Sundays at the University of Texas-RGV in Edinburg and visited the Evins Juvenile Detention Center in Edinburg once a month. He continued to appear at important functions and events in the diocese this year. As late as Aug. 21, he participated in the ordination of a transitional deacon at the Immaculate Conception Cathedral in Brownsville. Funeral arrangements are as follows: Rosary vigil will be at 7 p.m. Tuesday, Sept. 28 at the Immaculate Conception Cathedral in Brownsville. Viewing will be from 8 a.m. to 6:30 p.m. Wednesday, Sept. 29 at the Basilica of Our Lady of San Juan del Valle-National Shrine. The funeral Mass will be at 10 a.m. Thursday, Sept. 30 at the Basilica of Our Lady of San Juan del Valle-National Shrine. Interment will follow. In lieu of flowers, donations may be made in his memory to the Seminarian Vocation Fund (https://www.osvonlinegiving.com/432/DirectDonate/76209), or mail to Seminarian Vocation Fund, Diocese of Brownsville, 700 N. Virgen De San Juan Blvd., San Juan, Texas 78589

The family of Bishop Emeritus Raymundo J. Peña created this Life Tributes page to make it easy to share your memories.