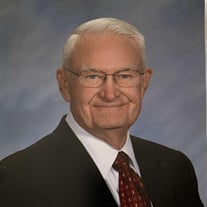 Billy Joe Day was born on December 10, 1929 in Bremond, Texas. He passed away peacefully in his recliner on January 17, 2022 of natural causes. He loved the Rio Grande Valley and lived in various towns throughout his life. He graduated from Weslaco High School in 1948 and then attended Corpus Christi University (now TAMU at Corpus Christi) and transferred to Southmost College in Brownsville. In 1950 he enrolled in North Texas University in Denton, Texas and graduated in 1952 with a BA in Accounting. Then in 1953 he became a Certified Public Accountant. He later became a partner of Mothershead, Hamilton, Day & Mayo in Harlingen until 1980 when he moved to McAllen and later became a managing partner with Grant Thornton. After he retired from Grant Thornton as a partner in 1991, he continued to practice accounting in McAllen as a tax manager with Burton, McCumber and Cortez until he retired in 2009 at the age of 80. He met the love of his life, Lynne Young, in 1950 at North Texas and they married in 1952. After she passed away in 1995 after 44 years of marriage, he never remarried. They were long-time members of First United Methodist Church in Harlingen until they moved to McAllen and joined First United Methodist Church. Billy Joe served as president of the Finance Committees at both FUMC Harlingen and in McAllen. He also served as President and Deputy District Governor for the Lions Club, a member of the RGV Council of the Boys Scouts of America and a recipient of the Silver Beaver Award, and on the board of the Salvation Army. He enjoyed traveling with his wife, Lynne; and after she passed, he and a few close friends visited various places like New Zealand, Turkey, Greece and Poland. He also enjoyed spending time with his daughters, Cheryl and Dawn, and their husbands, Kevin and Pete and his only granddaughter, McKenzie Lynne. He had fond memories of vacations with her to Disney World, Washington DC, Maine, Boston and New York City. His sense of humor will be missed. Until the very end, he loved to laugh – always enjoying a good joke. He is preceded in death by his parents, William J Day and Geneva Curry Day, and his wife, Lynne Day. Survivors include his daughters, Dawn Kiser and Cheryl Flannery, sons-in-law, Pete Kiser and Kevin Flannery, and granddaughter and grandson-in-law McKenzie and Huschai Severe. The family is deeply grateful to the staff at The Gardens at Brookridge in Pharr who cared for him for the last 6 years, his doctors and caregivers, and the community of FUMC McAllen for their love and friendship especially after the death of his wife. Billy Joe and Lynne were deeply blessed by friends in both Harlingen and McAllen who became like family. A service will be held on Saturday, January 22 at 10:00 a.m. at First United Methodist Church McAllen, in The Social Room. In lieu of flowers, gifts in memory of Mr. Day can be made to the general operating fund of First United Methodist Church of McAllen, TX.

Billy Joe Day was born on December 10, 1929 in Bremond, Texas. He passed away peacefully in his recliner on January 17, 2022 of natural causes. He loved the Rio Grande Valley and lived in various towns throughout his life. He graduated from... View Obituary & Service Information

The family of Billy Joe Day created this Life Tributes page to make it easy to share your memories.