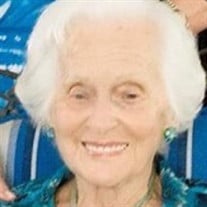 Beverly "June "(Taylor) Davis, age 95, transitioned from her earthly home in McAllen, Texas, to her eternal Heavenly Home on October 20, 2019. She is predeceased by her infant son David Theodore and Curtis, her beloved husband of 71 years. June was born the third of four children to William Emmet Taylor and Grace (Kelly) Taylor in Depew, Oklahoma on May 19, 1924. The family moved to Bristow, Oklahoma, where June graduated Salutatorian from Bristow High School in 1942. She attended Oklahoma A&M where she met Curtis Davis. They were on September 19, 1943. After Curtis's graduation, the family moved numerous times as Curtis pursued varied career opportunities, during which God blessed them with six children. The family finally put down permanent roots in 1967 in McAllen, Texas, where Curtis and June resided until their respective deaths. In addition to being a homemaker and mother to five children, June was her husband's trusted confidant and partner. In 1959 she obtained her real estate broker's license and opened a real estate office in Oklahoma City. When the family moved to McAllen in 1967, she participated with Curtis in operating several corporations. June accepted Jesus Christ as her Savior when she was twelve years old, and her life was devoted to sharing her faith with others. She was a faithful "prayer warrior" for her family and friends. The fruit of that spiritual legacy continues as her grandchildren and great grandchildren make professions of faith. One of June's greatest pleasures was music. She taught herself to play the piano and organ and composed numerous spiritual scripture songs that are a lasting treasure for her family. June is survived by her five children: Jerry (Alva) Davis, Anita (Jim) Nash, Sandra (Rodney) Womack, Candace (David) McCoy, Randy (Karen) Davis; eight grandchildren: Douglas, Jay, Justin, Brandy, Ryan, Amy, Mark and Matthew; eight great grandchildren. The family deeply appreciates the special people who have lovingly assisted in caring for June: Patty, Nora, Dee, and Carol. The Celebration of Life Service for June Davis will be held October 26, 2019, at the Church of the King, 7401 N Ware Road, McAllen, Texas at 2:30 PM, with burial to follow at Valley Memorial Gardens The family requests that in lieu of flowers, donations be made to St. Jude's Hospital, Samaritan's Purse, or Church of the King.

Beverly "June "(Taylor) Davis, age 95, transitioned from her earthly home in McAllen, Texas, to her eternal Heavenly Home on October 20, 2019. She is predeceased by her infant son David Theodore and Curtis, her beloved husband of 71 years. June... View Obituary & Service Information

The family of Beverly "June "(Taylor) Davis created this Life Tributes page to make it easy to share your memories.