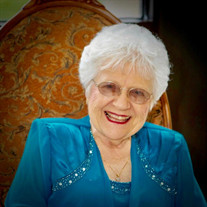 Beulah K. Bosch 1928 - 20¬¬20 Beulah K. Bosch was escorted into heaven on July 31, 2020 at the age of 92¬ in McAllen, Texas. Born on March 8, 1928 in Springfield, Ohio as Beulah Katherine Morgan, she was the third child of prominent Gospel ministers, Harold and Katherine Morgan. As a teenager, Beulah joined her parents in their itinerate evangelistic ministry, and were known as The Musical Morgans. Tent revivals, church services, and radio broadcasts comprised much of the Morgans' travels across the country, including Florida where Beulah met her husband, Robert C Kent, announcer for a local radio station advertising the Morgans' gospel meetings. Bob and Beulah were married for 28 years until his death in 1977 and raised 4 children: Michael Kent of Pharr TX, Nancy Clark (Terry) of San Clemente CA, Rhonda Gray (David) of Harlingen TX and Kathy Johnson (Douglas) of McAllen TX. The lineage of Bob and Beulah includes 9 grandchildren and 15 great-grandchildren. In 1981 Beulah married Tony Bosch, and lived together in Pharr TX for 29 years until Tony's death in 2010. Both Tony and Beulah were preceded in death by Tony's son Robert, and survived by Tony's daughter Beverly Barron (Thomas) of McAllen TX and daughter-in-law Janet Bosch also of McAllen TX, along with 3 grandchildren and 6 great-grandchildren. Beulah's 92 years were lived with love for family, friends and her Lord Jesus Christ. She was known for her infectious smile and enthusiasm for travel, games, and ice cream. At 50 years of age, Beulah's love of flying led her to flight lessons, resulting in a successful solo flight, which turned out to be her only goal for the training. Beulah was always supportive of the mission work that her father and mother founded in 1956, known as Border Missions - a foreign mission station located in Hidalgo, Texas, near the border of Reynosa Mexico. She served as president after her mother Katherine Morgan was no longer able, until new directors took leadership in 2010. A Celebration of Life service will be held to honor Beulah on Saturday August 29, at 11:00am, in the Annex of The Family Church, located at 2322 N McColl Rd in McAllen, TX. Donations are encouraged to be given in Beulah's memory to Border Missions, which is a non-profit 501(c)(3) organization in Hidalgo TX.

Beulah K. Bosch 1928 - 20¬¬20 Beulah K. Bosch was escorted into heaven on July 31, 2020 at the age of 92¬ in McAllen, Texas. Born on March 8, 1928 in Springfield, Ohio as Beulah Katherine Morgan, she was the third child of prominent Gospel... View Obituary & Service Information

The family of Beulah K. Bosch created this Life Tributes page to make it easy to share your memories.