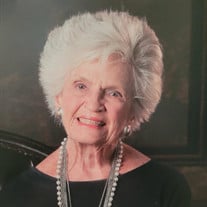 Betty Patterson went home to her Lord and Savior, at the age of 102, on January 31, 2022. She was born in Mission, TX on November 8, 1919 to Frances and John Burkhart. She grew up in Alamo and graduated from PSJA in 1936 and continued her education at Baylor University where she met and fell in love with the star quarterback on the football team, "Bullet" Bill Patterson. She was Homecoming Queen and completed her Bachelor of Music in 1940. She married J.W. "Bill" Patterson of Hillsboro, TX on May 21, 1942. He played professional football then joined the Navy and fought in the Pacific during World War II. They settled in McAllen where he started his law career. They were very involved in the ministry at First Baptist Church in McAllen where she sang in the choir, led the children's and youth choirs, started and directed the Hand Bell Choir. Together they were Administrators and Teachers of the Young Married Sunday School Class and later the Senior Adult class, organized Vacation Bible School, and were involved in the Youth Department. She was president of the Women's Missionary Union and worked with the Girls in Action and Acteens for many years. She also sang in the local operettas and the Valley Civic Choir. Betty actively served and worshiped at First Baptist McAllen for 77 years. Mrs. Patterson's love for music and teaching led her to spend 6 years at Sharyland ISD teaching K-12 music and choir. Betty will be remembered for her Christ like love and grace; she was the epitome of a Godly woman and touched many lives through her kindness and joyful spirit; she leaves a beautiful legacy for her family and friends. Betty leaves behind three children; Diane Marburger (Eddie), Joe Patterson (Shawn), and Debbie Davis (Randy). Her niece Marcia Miller Atwood Ply (Cash), and nephews Johnny Miller (Pat) and Lloyd Miller and her sister-in-law Edith Patterson and nephews Jake Patterson (Marion) and Bruce Patterson (Trish). Her grand children include: Meliss Kay Marburger, Kyle Marburger (Jane), Lance Marburger, Leslie Marburger Brady (Sean); Will, Beth and Tucker Patterson; Lauren Davis Winters (Jeremy). Her great-grand children include Taylor and Sydney Marburger; Eddie Lee, Boaz William and Robbie Jayana Marburger; Avery Diane and Hayden Berlyn Brady; Ezra James, Sutton Elizabeth and Sydney Joy Winters as well as many great nieces and nephews. Consuelo Duncan and her children Claudia Rotberg (Braden) and Darlene Duncan are considered part of Betty's extended family. She was preceded in death by her beloved husband Bill Patterson, her sister and brother-in-law Esther and Raymond Miller, her sister-in-law and brother-in-law Elizabeth and Charles Young and nephew Pat Young, and her brother-in-law Harry Ward Patterson, as well as, her niece and her husband Marilyn and Charles Curtis. The entire family wishes to extend their heartfelt gratitude and thanks to the wonderful ladies that cared for Betty in her later years so she could remain in the comfort of her home; Cheryl Smith, Mari Soria, Norma Barrera and Lucy Neaves de Lopez, as well as the nurses and staff from Healing Touch Hospice who made Betty's final days so peaceful. Visitation will be on Thursday, February 10th from 5pm to 7pm at Kreidler Funeral Home located at 314 N. 10th St., McAllen. A Funeral Service will be held on Friday, February 11th at 10am at First Baptist Church located 1200 Beech, McAllen. Family and friends will gather at Roselawn Cemetery1201 S. Main St., McAllen at 1pm for a short graveside service and interment. In lieu of flowers donations can be sent to First Baptist Church McAllen "Refresh Fund" for building improvements or the "Missions Fund" for Missions efforts; FBC McAllen, 1200 Beech, McAllen, TX 78501.

Betty Patterson went home to her Lord and Savior, at the age of 102, on January 31, 2022. She was born in Mission, TX on November 8, 1919 to Frances and John Burkhart. She grew up in Alamo and graduated from PSJA in 1936 and... View Obituary & Service Information

The family of Betty Patterson created this Life Tributes page to make it easy to share your memories.

Betty Patterson went home to her Lord and Savior, at the age...