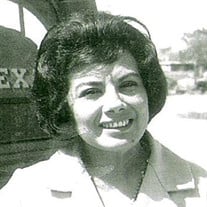 Beatrice Jenson; beloved wife and mother, passed away peacefully in her home in McAllen, Texas., on Thursday, 2 January, 2020, her daughters were present at bed-side. She was 87. Beatrice was born and raised in Laredo, Texas to Mr. Daniel and Mrs. Andrea Cardenas Alvarado on 27 May 1932, where she was the youngest of 10 siblings. She met Joe P. Jenson, who was an Airman stationed at Laredo AFB, and they fell madly in love and married in 1952. She supported her husband throughout his military career by accompanying him, along with their 5 children to such exotic overseas locations as France, Germany, Japan, Portugal and throughout the U.S. until he retired in 1973, where the US Air Force recognized her career support with a USAF Certificate of Retirement. They then moved to McAllen and once again she supported her husband by supplementing the income by entering the job market while he attended and graduated TSTI. Beatrice was a devoted Christian, home maker, seamstress, and more importantly a mother. She always helped her entire family in whatever means she could render assistance in. She seemed to never forget birthdays anniversaries, and special occasions. Even in her darkest hours; as she approached death; she read her daily devotions never losing faith. She will always be remembered because of her gracious heart and consideration for others which has touched countless others that she encountered throughout her life. After the death of her husband and two sons she took in her beloved puppy; JJ, whom she pampered to the very end. Preceding her in death, is her husband, Joe P. Jenson, Poteau, OK; her sons, James C. Jenson, Piedmont, OK and Joe P. Jenson Jr., Pharr, TX, her parents and all her brothers and sisters. She is survived by her son, John (Yon Sil) Jenson, Carrollton, TX; two daughters; Stella (Randy) Conville, Mission, TX; Jacqueline (Roger) Cochran, Charleston, SC; four grandchildren; Julie Jenson, James Jenson, Roger Cochran, and Steve Cochran. Kreidler Funeral Home will officiate the funeral on Wednesday 8 January 2020 with visitation at 10:00 and a 11:00 am service; conducted by Pastor Guasa at the Kreidler Funeral Home. There will be a private internment at the Rio Grande Valley State Veterans Cemetery in Mission TX.

Beatrice Jenson; beloved wife and mother, passed away peacefully in her home in McAllen, Texas., on Thursday, 2 January, 2020, her daughters were present at bed-side. She was 87. Beatrice was born and raised in Laredo, Texas to Mr. Daniel and... View Obituary & Service Information

The family of Beatrice Jenson created this Life Tributes page to make it easy to share your memories.