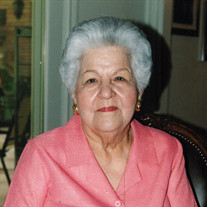 Ana Maria Davila was born on October 6, 1929 in Pharr, TX and died peacefully surrounded by her family on October 3, 2017 in Edinburg, TX. She was preceded in death by her husband of 53 years, Jose Fidel Davila; her parents, Evaristo Montalvo and Herlinda Paras Montalvo; her brothers, Romeo Montalvo, Jose A Montalvo, Jesus Montalvo; and a grandson, Brian Fidel Davila. She is survived by her children, Manuel (Sylvia) Davila from Houston, TX, Sandra Garcia from McAllen, TX, Dr. Fidel (Trudy) Davila from Springdale, AR, Efrain (Irma) Davila from Round Rock, TX, and Sonia (Quirino) Munoz from Edinburg, TX. She is also survived by her siblings, Alicia Monrreal from Houston, TX, Graciela Rio from McAllen, TX, Gerardo Montalvo from Houston, TX, Francisco Montalvo from Houston, TX and Leticia Trevino from Edinburg, TX. Ana Maria was affectionately known as "Momo" by her 13 grandchildren, 18 great¬grandchildren and a great-great-grandchild. Late last century, Ana Maria was instrumental in helping her husband establish the iconic Fidel's Mexican Restaurant in McAllen. She was a devout Roman Catholic and was an active member of St. Joseph the Worker Church. During her retirement, she enjoyed her grandchildren, traveling, quilting, and making her famous enchiladas. Ana Maria was a very special wife, mother, and grandmother who was full of life and love. Her laugh often lit up the lives of those she met. She will be missed deeply and she will live on in our hearts. Visitation will be held on Friday, October 6, 2017 from 4 p.m. to 8 p.m. at Kreidler Funeral Home at 310 N. 10th Street in McAllen with a rosary following at 7 p.m. The funeral mass will be on Saturday October 7, 2017 at 9:30 a.m. at St. Joseph the Worker Catholic Church at 900 S. 23rd St. in McAllen with interment to follow at Valley Memorial Gardens at 3605 N. Taylor Road in McAllen. Arrangements are under the direction of Kreidler Funeral Home.

Ana Maria Davila was born on October 6, 1929 in Pharr, TX and died peacefully surrounded by her family on October 3, 2017 in Edinburg, TX. She was preceded in death by her husband of 53 years, Jose Fidel Davila; her parents, Evaristo Montalvo... View Obituary & Service Information

The family of Ana Maria Davila created this Life Tributes page to make it easy to share your memories.