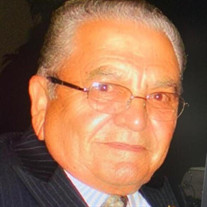 McAllen, Texas - Alvaro Martinez, 91, went to be with our Lord Jesus Christ on Monday, December 20, 202l. Alvaro, also known as Albert, was preceded in death by his parents, Eduardo Martinez and Manuela Cortez Martinez and four siblings,Olivia Balli, Elodia Peralez, Francisca Figueroa, and his only brother, Rosendo Martinez. He is survived by his devoted wife of 68 years, Estella Salinas Martinez, children Linda Martinez Moreno (Ricardo Jr.), Velma A. Martinez Pena, Sylvia Marie Martinez and Alvaro Martinez (Corina), and ten grandchildren and twelve great grandchildren. Our father was a wonderful and devoted self made business man very driven to his businesses. He worked at Hewlett and White in 1953 went on to work for Charles Clark Chevrolet. In 1960 he had the opportunity to purchase Skinners Flower Shop in Edinburg, Texas in which he worked very hard to make it succeed and serviced the Edinburg community to the best of his ability, and that he did. He became prominent and well known for his services and expertise in the floral design industry. In 1980 he sold his business and went on to buy Rio Grande Valley Sanitation Control and continued his business until he retired at 77 years young. Our family wishes to give a Special Thank You to DHR Hospice Doctors and nurses, Un Buen Amanecer for their providers. Visitation will be held at Kreidler Funeral Home Tuesday, December 28, 2021, from 5:00 - 8:00 pm and a Rosary will take place at 7:00 p.m. There will be a mass at Our Lady of Sorrows on Wednesday, December 29, 2021 at 10:30 a.m. - Interment will follow at 1:00 PM at Valley Memorial Gardens in Mission, Texas.

The family of Alvaro Martinez created this Life Tributes page to make it easy to share your memories.