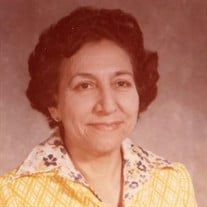 Alicia G. Salinas, age 92, entered into eternal rest on Thursday, April 26, 2018 at McAllen Medical Center after a brief illness. She was born on February 27, 1926 in McAllen, Texas to Alfonso and Lina (Martinez) DelaGarza. She was preceded in death by her parents, 5 brothers Victor, Rafael, Roberto, Rodolfo and Alfonso, Jr., and her sister Paula G. Fuentes. She is survived by her husband Crescencio Salinas. Alicia grew up in McAllen, Texas and graduated from McAllen Senior High School in 1944. She worked at the Credit Bureau in Mission and went to night school to earn a college degree. She received her degree from Pan American College and worked as an elementary school teacher for McAllen ISD until she retired. She met Crescencio while attending night school and they were married in December 1966. She said that she had seen Crescencio when she worked in Mission but didn’t meet him until they met in a college class. God had a plan and they were destined to share a life together. Alicia enjoyed playing scrabble and games that challenged the mind. She loved to travel and went on several cruises and visited Rome and Medjugorje, Bosnia and Herzegovina. Crescencio and Alicia traveled to Belgium to visit the grave of Alicia’s twin brother Alfonso, Jr, who lost his life in World War II. They were very devout Catholics and were members of the Serra Club which promotes Catholic vocations to the priesthood and religious life. Alicia taught catechism at both Sacred Heart and Our Lady of Sorrows. She was a Eucharistic Minister and member of the Catholic Daughters of the Americas. Crescencio and Alicia were always available when asked to lead a rosary and enjoyed serving in the church. They both loved collecting prayers and would recite a rosary nightly. God was a central part of their life. Alicia enjoyed gardening, needlepoint, crochet, sewing and made her own dresses. When her sister Paula was making a quilt, she was eager to come and help sew. If her sister was making tamales, Alicia wanted to help untar tamales. Alicia was an artist and painted several paintings. She was very creative and wrote many poems in English and Spanish. She would visit her sister Paula every day and if she couldn’t visit she would call. She will be missed by her family of nieces, nephews, grand-nieces and grand-nephews. Special thanks to Barcelona Assisted Living, Mario and Jeannette San Roman, and all of the staff at Barcelona who cared for Alicia. Visitation will be held at Kreidler Funeral Home on Monday, April 30,2018 from 12:00pm -7:00pm with a Rosary at 7:00 pm. Funeral mass will be celebrated at Our Lady of Sorrows Chapel in McAllen at 10:00am on Tuesday, May 1,2018. Burial will follow at Valley Memorial Gardens in McAllen.

Alicia G. Salinas, age 92, entered into eternal rest on Thursday, April 26, 2018 at McAllen Medical Center after a brief illness. She was born on February 27, 1926 in McAllen, Texas to Alfonso and Lina (Martinez) DelaGarza. She was preceded... View Obituary & Service Information

The family of Alicia G. Salinas created this Life Tributes page to make it easy to share your memories.