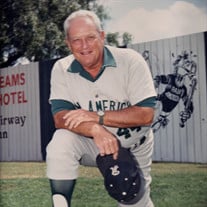 ALFRED HILL OGLETREE He was a humble man, a kind human being and an extraordinary coach and teacher, who quickly took the blame for his team’s losses and always gave the credit to his team when they won. Alfred Hill Ogletree, adoring husband, tender and gentle father and beloved coach passed away on June 24, 2019 at his home in McAllen, Texas at the age of 89. Born in San Antonio, Texas, he was the oldest of three children. He was preceded in death by his wife, Joann. He is survived by his five children, Margaret (Joe) Williamson, Alfred “Bud”(Melinda) Ogletree, Laura (Jorge) Garcia, Tom (Letty) Ogletree, Dan (Laura) Ogletree, his sister Sue (Delvin) Lefner, his brother James Ogletree, 13 grandchildren, 8 great grandchildren, 2 great great grandchildren and countless “sons” who played the game of baseball for Coach Al. Coach Al loved his family, his country and baseball. After graduating from Austin High School, he was given a full scholarship to play baseball at Texas A&M University. He became an All Southwest Conference catcher and a member of the 1st Aggie team to go to the College World Series (1951). He met the love of his life, Alice Joann Craig while attending Texas A&M and they were married shortly after graduation. Al was in the Corps of Cadets at Texas A&M and was commissioned into the Army upon graduation. He served as a Quartermaster Officer at Fort Hood, Texas. In 1955, Ogletree returned to A&M and earned his Masters of Education degree and in 1956 began his 40 year career as a college baseball head coach…University of Dallas (1957-1965), Sul Ross State College (1966-1968), Pan American College/University (1969-1989), UT Pan American (1990-1997). While at Sul Ross State College, his team earned a trip to the NAIA College World Series in 1968. He came to Pan American College in the fall of 1968 where he remained until he retired. The Broncs earned a spot at the NCAA College World Series in 1971. Al Ogletree received many tangible honors in his coaching career being inducted into 9 Halls of Fame: American Baseball Coaches Association Hall of Fame, Texas A&M University Hall of Fame, University of Dallas Hall of Fame, Sul Ross State University Hall of Honor, University of Texas-Pan American Hall of Honor,Texas Baseball Hall of Fame, Rio Grande Valley Sports Hall of Fame, Austin High School Hall of Honor and Central Texas Semi-Pro Hall of Fame. In 1968, Coach Al was recognized by the NAIA District IV as Coach of the Year. In 1971, he was recognized again as Coach of the Year by the Texas Sports Writers Association, Sporting News, NCAA District IV and South Plains Professional Scouts Association. ‘In everything give thanks.’ 1 Thessalonians 5:18 The family would like to thank Janet Gregory, Rick Hernandez and his staff and especially our brother-in-law, Jorge Garcia for the excellent care given our father for the last 5 years. Our prayers were answered by the love and attention you gave Coach Al. Our thanks also to Legacy Hospice for your assistance. Our heartfelt thanks to our extended family, friends and neighbors for your love, thoughtfulness and support during this time of loss. You have blessed our family in so many ways. The best way to honor Coach Al is to remember all the things he taught us with his life…to be humble, to live your life as an example to everyone around you and to love without measure. His legacy will live on in the lives of his family, the many young men he coached and loved and all who were fortunate enough to have known him. In lieu of flowers, the family requests donations be made to the Al and Joann Ogletree Scholarship Endowment by contacting Jeannette Benavides at (956)665-5301 or email [email protected] Visitation will be Sunday, June 30, 2019 from 4 to 8p.m. at Holy Spirit Catholic Church with a rosary at 7p.m. Funeral Mass will be at 11a.m. Monday July 1, 2019 at Holy Spirit with burial to follow at 1p.m. at the RGV State Veterans Cemetery.

ALFRED HILL OGLETREE He was a humble man, a kind human being and an extraordinary coach and teacher, who quickly took the blame for his team&#8217;s losses and always gave the credit to his team when they won. Alfred Hill Ogletree, adoring... View Obituary & Service Information

The family of ALFRED HILL OGLETREE created this Life Tributes page to make it easy to share your memories.

ALFRED HILL OGLETREE
He was a humble man, a kind human being...