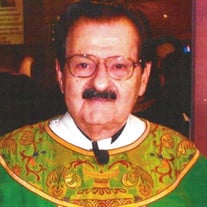 Msgr. Agostinho Pacheco went to be with the Lord on March 14, 2017. He was born in Fall River, Massachusetts to the late Manuel and Belmira Pacheco and was ordained to the priesthood on January 30, 1960. He was preceded in death by his brothers, Manuel and Arthur Pacheco and his sisters, Idalina Perry and Mary Mosher. He is survived by his sister, Irene Habib of Westport, MA; sisters-in-law, Margarite Pacheco and Elaine Hebert; and several nieces and nephews. Father Pacheco's first assignment in the Fall River Diocese was at Immaculate Conception Parish in New Bedford, MA. After several other assignments in that diocese, in 1968 he joined then Bishop Humberto Medeiros in the Diocese of Brownsville, in the Rio Grande Valley of Texas, where he spent the rest of his priestly ministry. His tenure in the Brownsville Diocese saw him serve communities in numerous assignments, under the leaderships of Bishop Medeiros, Bishop James Fitzpatrick, Bishop Enrique San Pedro, Bishop Raymundo Pena and Bishop Daniel Flores, in Brownsville, Alamo, San Benito and McAllen, TX. He served from the lower part of the Rip Grande Valley to the Mid Valley where he assumed the pastoral assignment of what was to become Holy Spirit Parish in McAllen. After completing the creation of this new parish, and serving there during its initial years of growth, he was assigned to Our Lady of Sorrows Parish in McAllen. There he served as pastor overseeing a large congregation and McAllen's only Catholic elementary school with more than 500 students. During his time at Our Lady of Sorrows Parish, he was responsible for the construction of its new church building and office complex. Father Pacheco served as chairman of numerous pastoral commissions throughout the diocese including chairman of the diocesan insurance committee and head of the deanery in which he served. In 2005, Father Pacheco was elevated to the status of Monsignor by Pope Benedict XVI, at the recommendation of Bishop Raymundo Pena. In 2007, Msgr. Pacheco retired from active ministry and began serving in the hospital ministry at Doctors Hospital at Renaissance in Edinburg, TX, also in the Brownsville Diocese. During his ministry, he impacted the lives of many people and he, himself, received many graces from the people he served. There are so many individuals who were of great assistance to him during his many years in the Priesthood and especially during his final months. His family would like to recognize in his name Alfred Wasielewski, Alonso Cantu, James Moffitt, Lee's Pharmacy, the Chaplains at Doctors Hospital at Renaissance, the San Juan Nursing Home and his colleagues, the Priests of the Brownsville Diocese. Visitation will be from 3-7pm Thursday, March 16, 2017 at Our Lady of Sorrows Catholic Church with a rosary at 7 pm. Funeral Mass will be at 10 am Friday, March 17 at Our Lady of Sorrows. Msgr. Pecheco will be buried in Massachusetts. In lieu of flowers, the family requests memorial donations be made to: Our Lady of Sorrows Capital Campaign Fund, 1108 W. Hackberry, McAllen, TX 78501 or to the San Juan Nursing Home, 300 N. Nebraska, San Juan, TX 78589.

Msgr. Agostinho Pacheco went to be with the Lord on March 14, 2017. He was born in Fall River, Massachusetts to the late Manuel and Belmira Pacheco and was ordained to the priesthood on January 30, 1960. He was preceded in death by his brothers,... View Obituary & Service Information

The family of Msgr. Agostinho Pacheco created this Life Tributes page to make it easy to share your memories.

Msgr. Agostinho Pacheco went to be with the Lord on March 14,...