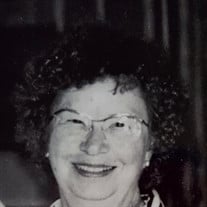 Agnes Lucile McKeever Lucile McKeever died peacefully with family members at her side on October 1, 2016 at the Gardens at Brook Ridge. She was 96 years old. Born at home to Minnie Scott and Henry Tull Toothaker in Manhattan, Kansas, on November 12, 1919, Lucile was the third of six children. As a very young child, she moved with her family to Alamo, Texas, where her parents took up farming. In 1925, her parents built a two-story house on Tower Road, which stands today as a reminder of Toothaker family life until the 1970s. Lucile attended James Bowie Elementary School in Alamo, and she had a happy childhood with fond memories of her brother, Scott, and sisters, Kathryn, Patricia, Jeannette, and Marian, and their close friends. Lucile graduated from High School in the Pharr-San Juan-Alamo (PSJA) School District in 1937, and attended Edinburg Junior College, where she graduated in 1940. As a young adult, she moved to San Antonio as an employee of Fordyce & R.W. Briggs at Kelly Air Field, living for a time with her sister, Patty, and friend, Doris Chorpening (Wagner). With its strategic military bases during World War II and large population of service personnel, the city was an exciting place in the 1940s for new experiences and friends. Lucile met her future husband, John H. “Jack” McKeever, on a blind date in December 1943, which started a lifetime love affair until his death in 2012. Lucile and Jack were married in Malden, Missouri, on February 12, 1945, just before he was sent to China for combat service as a navigator with the 14th Army Air Corps. Following the war, they moved to Alamo in 1947 to begin citrus farming and to raise a family of four children, with a parade of many animals, including dogs, cats, horses, cows, chickens, and turkeys. Severe weather during the 1950s, with an historic drought and killing freezes for citrus orchards, led them both to make career changes during the 1960s while supporting a very active family. Lucile returned to college and earned baccalaureate and graduate degrees that led to a long career as an educator in the PSJA School District. Lucile was most proud of her years as a special education teacher for students at the Doedyns Elementary School. After retiring from teaching in 1985, Lucile enjoyed her grandchildren and was immersed in her artistic painting, cooking, gardening, their dogs, and frequent family gatherings. With no prior boating experience, she and Jack also had discovered the joy of sailboats, and successively owned three with many related adventures, serene, humorous, and even harrowing. Lucile was a meticulous planner and diarist of their trips, and she often conquered seasickness with quiet determination. After Jack’s retirement in 1990, they acquired a spacious trawler, Moonglow, as their final boat. Their Moonglow trips, especially the long ones, provided many colorful memories and inspired everyone who joined them there to enjoy life and to be curious and courageous in seeking new and enriching life experiences. In her last years Lucile lived quietly, and continued painting and reading as she confronted serious health conditions with the close support of her children. During that period, she appreciated beyond words the dedication of the John H. “Jack” McKeever Elementary School. As a nearly life-long resident of Alamo, she witnessed great change in the Rio Grande Valley over a long and rich life, and she never imagined herself residing in any other place. As throughout her life, she retained an inspiring quiet strength of character to the end. She will be deeply missed. Lucile is survived by Sharon Slagle and Richard Ramke of Alamo, Robin McKeever of Austin, Jack and Mary McKeever of Boerne, and Dennis and Cindy McKeever of Alamo, grandchildren George (Rebecca) Slagle of Kerrville, Stephen Slagle of Dallas, Jennifer (Dan) Green of Clemson SC, Jaclyn McKeever of San Antonio, Lesley (Lucas) Myhan of Seattle WA, Katie (Lee) Smith of Orange Grove, and Kelsey McKeever of Alamo, and nine great grandchildren. She is also survived by her sisters-in-law, Jean Goganian and Judy Cannon, both of Massachusetts, and many nieces and nephews in Texas, Massachusetts, New York, and Oklahoma. Mrs. McKeever was preceded in death by her husband of 67 years, Jack, her parents, Minnie and Henry Toothaker, her brother, Scott Toothaker, and sisters, Kathryn Toothaker, Patricia Donahue, Jeannette Hudler, and Marian Fitch, and their spouses. An informal gathering in remembrance will be held Tuesday, October 4, 2016, 5:00 to 7:00, at Kreidler Funeral Home. In accordance with Mrs. McKeever’s wishes, private graveside services will occur at Valley Memorial Gardens in McAllen. In lieu of flowers, a donation to a charitable organization of choice is suggested.

Agnes Lucile McKeever Lucile McKeever died peacefully with family members at her side on October 1, 2016 at the Gardens at Brook Ridge. She was 96 years old. Born at home to Minnie Scott and Henry Tull Toothaker in Manhattan, Kansas, on November... View Obituary & Service Information

The family of Mrs. Agnes Lucile McKeever created this Life Tributes page to make it easy to share your memories.