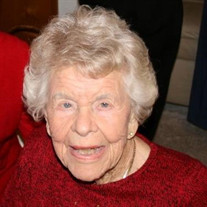 Ada Rebecca Toland died at home on October 14, 2019 to return to her maker. Ada was born on August 10, 1917 to Ben and Katherine Adson in Springview, Nebraska and was raised in Jaroso, Colorado on the Adson farm. She will always be remembered for her abundant and unconditional love. She will also be remembered for her love of life and adventurous spirit. Ada received her first horse at age five, and at age ten was paid to herd the milk cattle and at thirteen to drive the wild mustangs into corrals. She also rode them and broke them in. After graduating from high school, Ada came to McAllen with a family in the produce business. She kept books for the mayor, packed fruit, and taught school. She soon saved enough money to buy a horse and later joined the Sheriff's posse. Ada then participated in horseback square dancing. She also rode English and competed in horse shows throughout the valley winning many trophies and blue ribbons. From her first marriage she gave birth to Barbara Ann in 1940, Marvin Noel in 1942, and Benny Jack Chilcutt in 1943. After a divorce and several years later she married Ray A. Toland with whom she had a wonderful life for over sixty-five years. Together they had numerous exciting adventures. They enjoyed playing golf together throughout the valley. In addition to keeping the books for Ray's dusting and spraying business, Ada acquired a license from YMCA and began teaching swimming lessons at Crystal Waters in Mission and at Cascade in McAllen. A few years later, Ray built a pool in their back yard and Ada and her children continued teaching swimming for many years. Ada also became a licensed pilot. She had her commercial and instrument rating. As a result of their chartering business, they purchased property in Lake City, Colorado and built a home and a Lodge there. It was there that they became interested in snow skiing and later became “snow ski” instructors in Aspen, Colorado for thirty four years plus. When visiting with fellow instructors, they were introduced to “sailing” and soon owned their own sailboat. Their time was now spent between skiing, sailing and spending time with and enjoying their children and families. Ada was a member of the First United Methodist Church of McAllen and raised her three children there. She taught Sunday School many years there while her children were young. She is survived by her loving family: daughter Barbara Ann Parry (Bob) and son Benny Jack Chilcutt (Mary); grandchildren Audra Zinn (Roy), Robert Parry (Elizabeth), Heather Sanders (Michael), Paige Craig (Tim), Addie Kerr (Byron), Megan Chilcutt and ten great grandchildren; Sisters: Mickey King, Jean Ellis (Ray) and numerous nieces and nephews. She was preceded in death by her husband Ray, her son Marvin, her parents, and her brother. The family would like to extend a special Thank You to all the Fernandez Care Givers who so graciously took care of Ada so that she could remain in her home. A memorial service will be held at First United Methodist Church of McAllen on November 16, 2019 at 10:00 a.m. In lieu of flowers, donations may be made to FUMC of McAllen.

Ada Rebecca Toland died at home on October 14, 2019 to return to her maker. Ada was born on August 10, 1917 to Ben and Katherine Adson in Springview, Nebraska and was raised in Jaroso, Colorado on the Adson farm. She will always be remembered... View Obituary & Service Information

The family of Ada Rebecca Toland created this Life Tributes page to make it easy to share your memories.